420shares
Everything you need to plan the best under the sea party ever!  Includes part invitations, decorating ideas, fun food recipes, party favors and more!

Under the Sea Party Ideas

My little guy turned six last month and chose an Under the Sea party.  I was so happy to get at least one more year of doing a “cute” birthday before Transformers or Ninjago takes over! I usually start thinking of party ideas at least a couple of months before the actual party – there is something about party planning that I just love!  This year, however, was much busier and Connor kept changing his mind every two seconds in regards to what theme he wanted, so this party came together with just a couple of weeks of planning and one really LONG day of pulling it all together!

Under the Sea Printables

I found the cutest under the sea party printables over at Dimple Prints. They have the most adorable party printables and an amazing selection of themes to choose from. The party package came with a HUGE selection of printables – invites, cute food packaging, decorations, favor tags … pretty much everything I could think of and more!  It definitely made the decorating a ton easier! 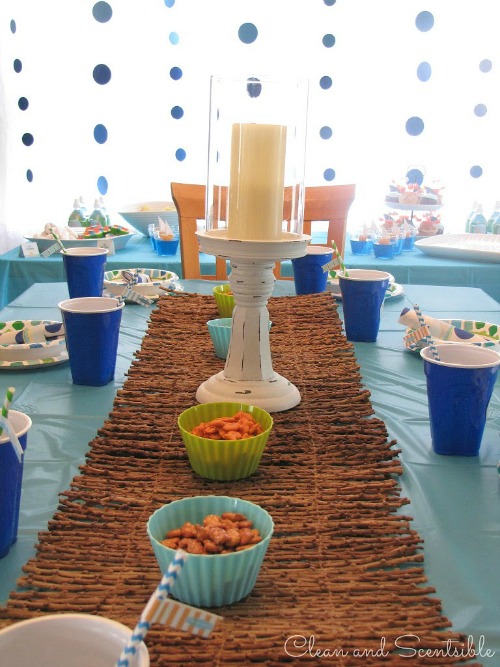 The decorations were kept fairly simple.  I punched out various shaped circles in 3 shades of blue and hung them on fishing line in front of the window.  On the walls we twisted some blue and green streamers for sea weed and hung balloons with more fishing line.  We also hung some lighted lanterns from the light fixture to hang over the center of the table. 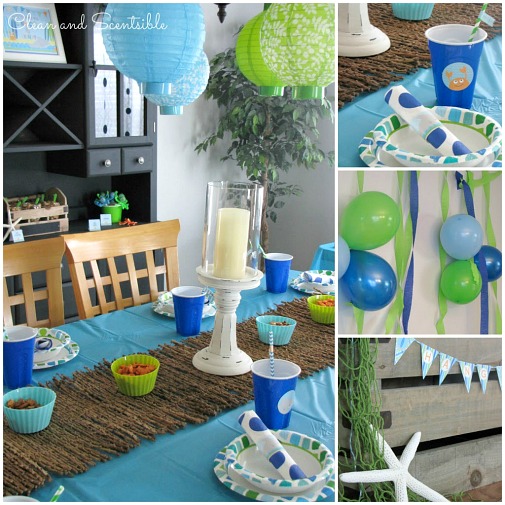 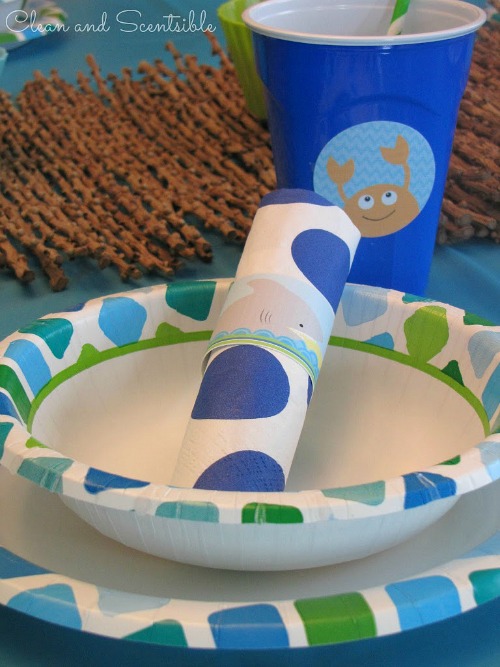 At the table, I used some of the Dimple Prints printables to dress up the place settings with the napkin holders and cups.  I also added some cute flags some matching paper straws.  And here’s a shot of the window covering at night to give you a better idea of what it looked like. 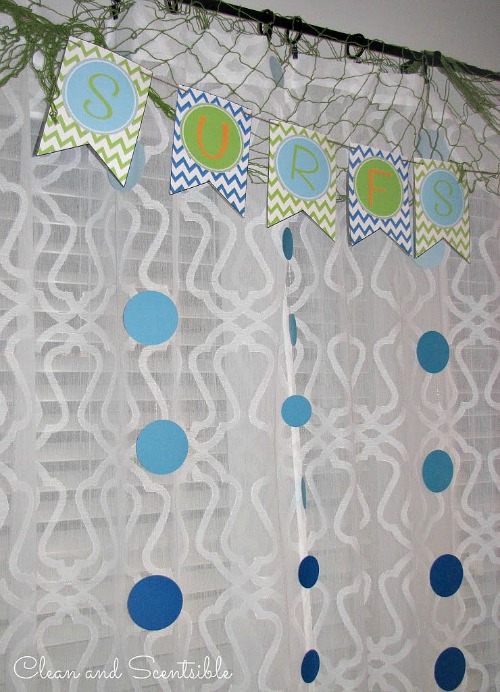 Despite the fact that I usually hate to cook, planning the party food is always my favorite thing to do. There are always so many fun ideas!  {Maybe I wouldn’t actually mind making dinner so much if we could always eat like this}. 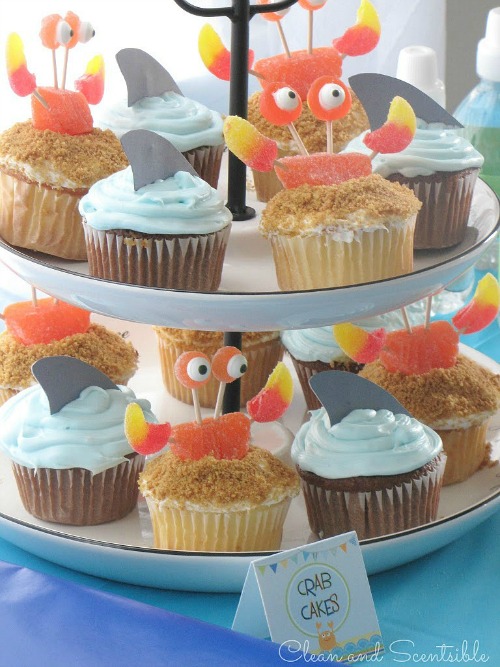 I made some more of the crab cupcakes that Connor took to school for his birthday and also used a shark fin printable from the party pack to create the shark fin cupcakes.  We had some “sub” sandwiches and I placed some rock candy in a couple of wine glasses filled with graham cracker crumbs for sand to add to the table {these were taken home as part of the goodie bags}. 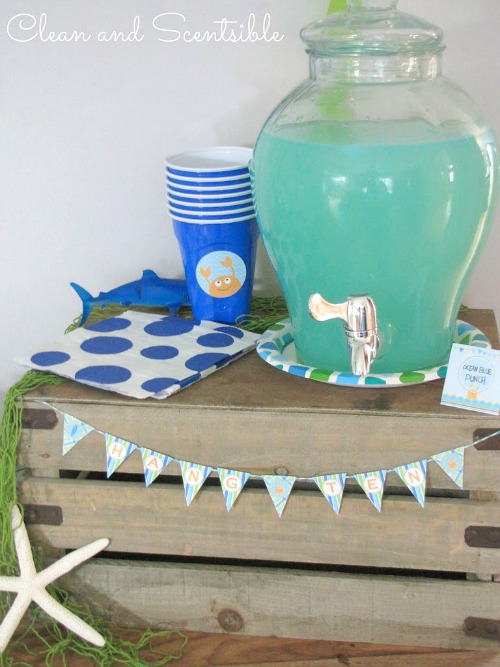 The Ocean Blue Punch was a mix of blue Kool-Aid and lemonade. 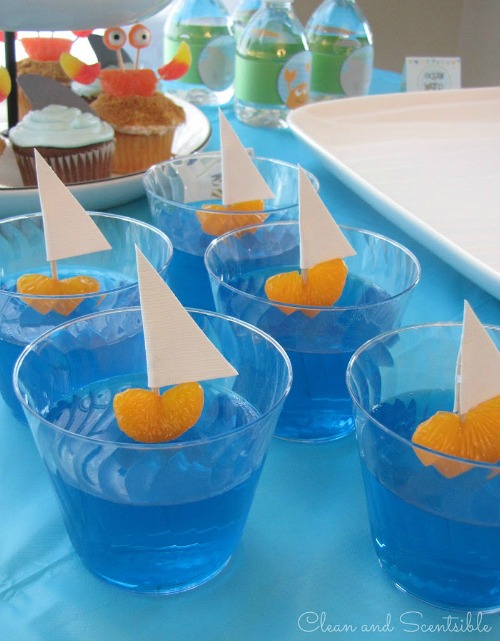 These little jello bowls were a BIG hit with the kiddos and the first of the food that was gone!  Blue Jello + a mandarin orange + some white cardstock on a toothpick = sailboat fun! 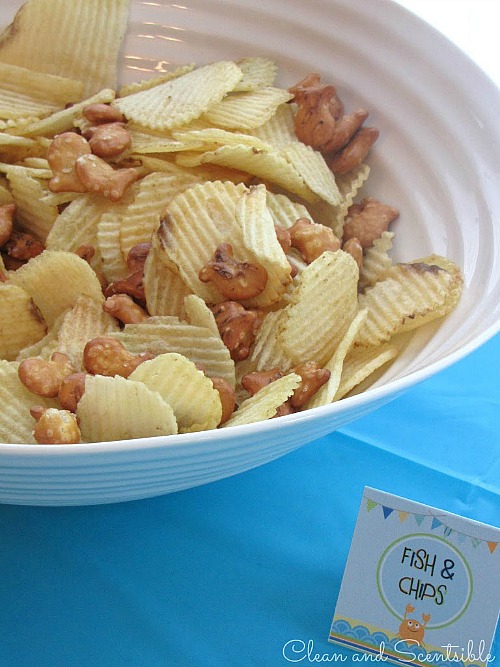 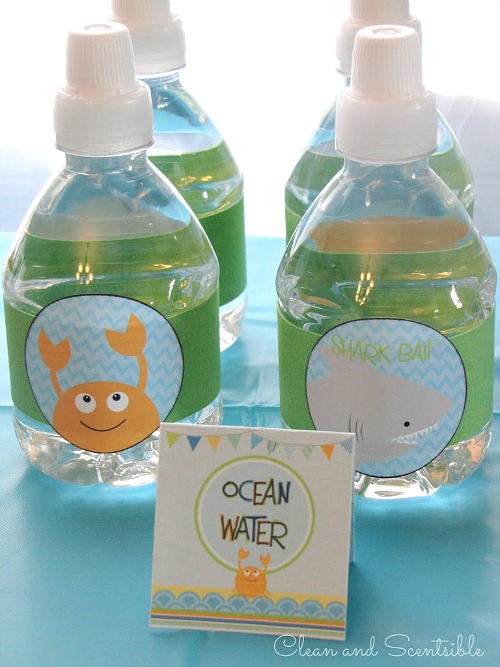 I love these little water bottles for kids’ parties – they are small enough that the water does not usually get wasted and the sports top lids are great for avoiding spills.  I bought the water bottles from Target, removed the labels and replaced them with some green cardstock and these cute printables from Dimple Prints. 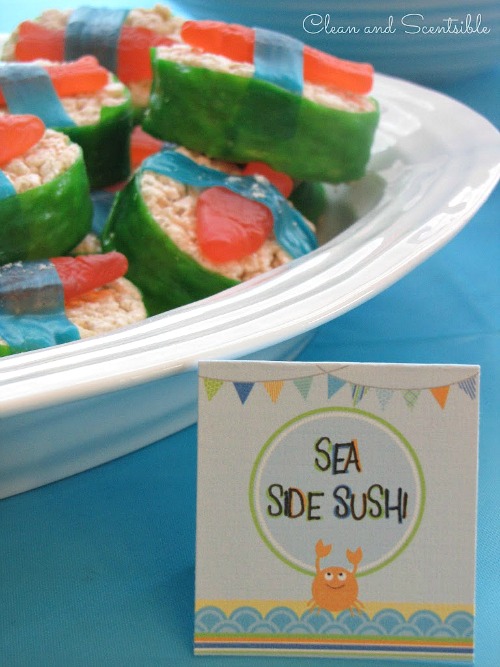 For the “sushi” I used a cookie cutter to cut out an oval shape from Rice Krispie squares, placed a gummy fish on top, and wrapped it with fruit roll-ups that I sliced into strips.  Let me tell you, green fruit roll-ups were really hard to find around here so we had to improvise with a little blue too!  My boys are both color blind so they didn’t even notice. 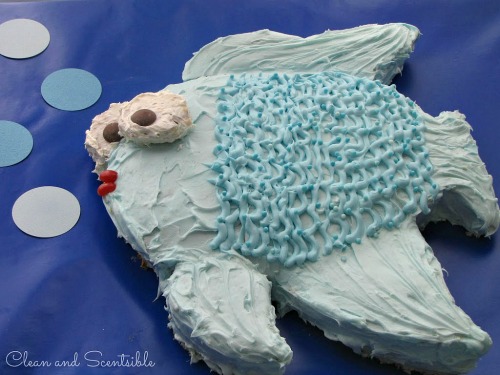 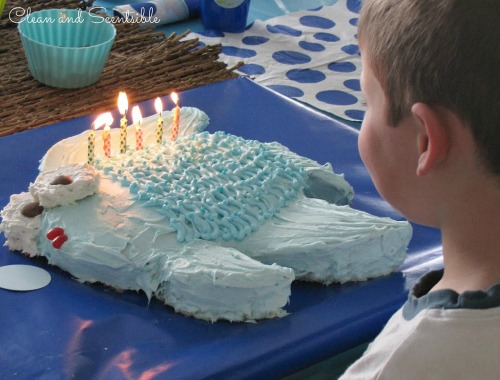 Cake decorating has never been one of my strong points, but I do always make a point of making the kids’ birthday cakes each year.  I found this cake pattern over at Martha Stewart and I think he turned out pretty cute.  I didn’t have a tray that was big enough so I took a large picture frame off the wall and wrapped it up!

We had striped bags filled with candies, sand buckets with a large bouncy ball, and a package of goldfish as well as a goldfish food bar {with different varieties of goldfish crackers} for the party favors. 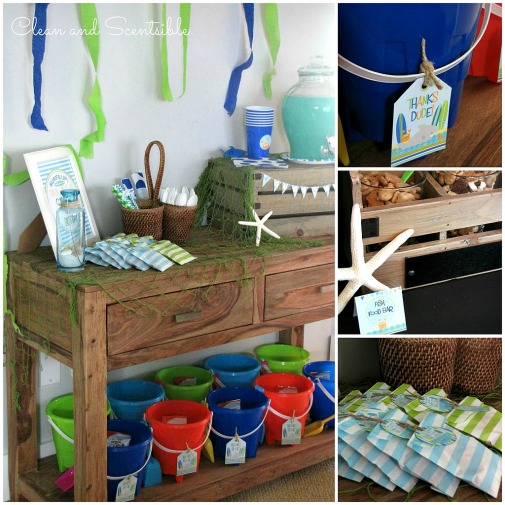 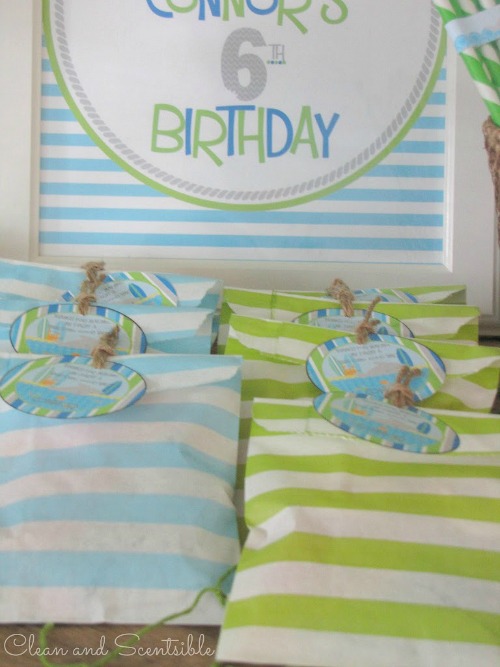 The kids also each picked some “sea coral” on their way out. 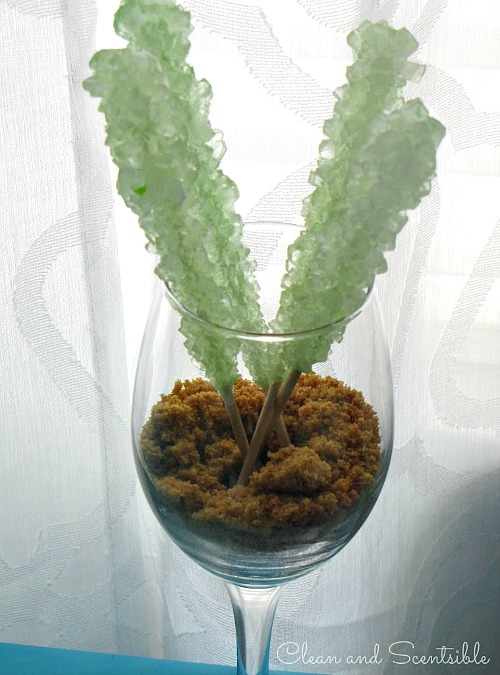 Thanks so much for dropping by the party!  It was lots of fun to put together and I LOVED the printables! Dimple Prints was awesome to work with and the printables definitely made things quicker, easier, and SO much cuter!! 🙂  You can connect with Dimple Prints here: 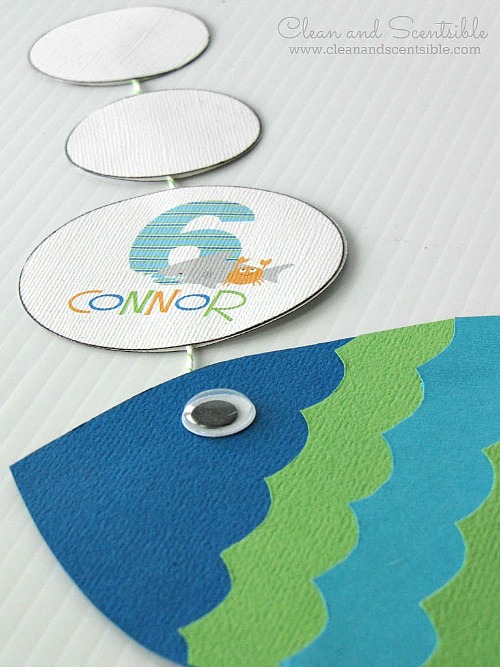 You can also find our party invites HERE.This post is part of Dimple Prints’ Summer Party Series and I did receive a free set of printables from Dimple Prints.  As always, all opinions are 100% mine.