6035shares
Hey guys! I hope you have all been having a great week!  Although it has been a short week with the holiday on Monday, I am still ready for the weekend!Today I am continuing on with Part 2 of my Star Wars Party series {you can catch the first post HERE} and talking about one of my favorite topics – FOOD!!! 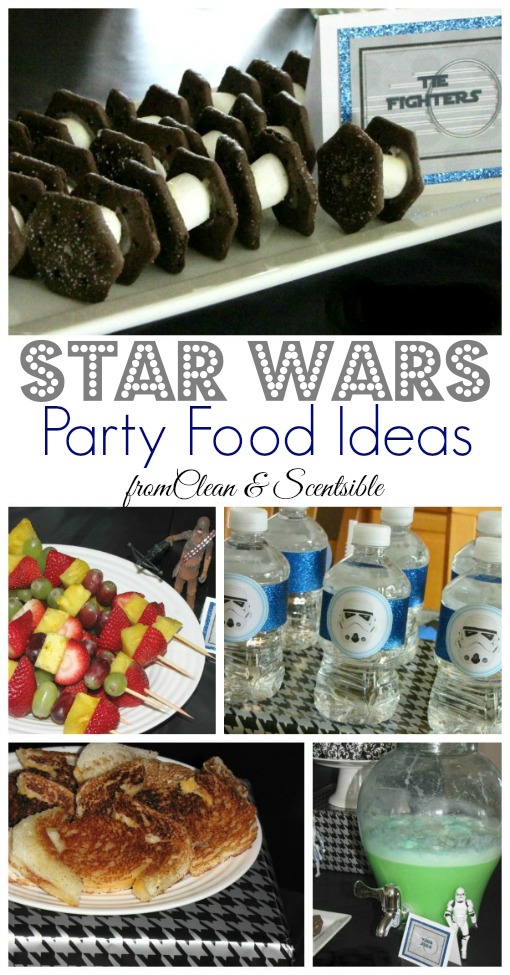 As we all know, little Jedi’s tend to be hungry folk.  All of that battling can be hard work.  I tried to keep the food fun while still slipping in a few relatively healthy food choices.  Here is what we served up…One of Connor’s favorite lunch time foods is grilled cheese sandwiches.  With the help of these sandwich cutters from Williams Sonoma, Dave made up these Spaceship Sandwiches while the rest of us were out playing some games.  The kids all gobbled them up and had fun blasting away at the ships. 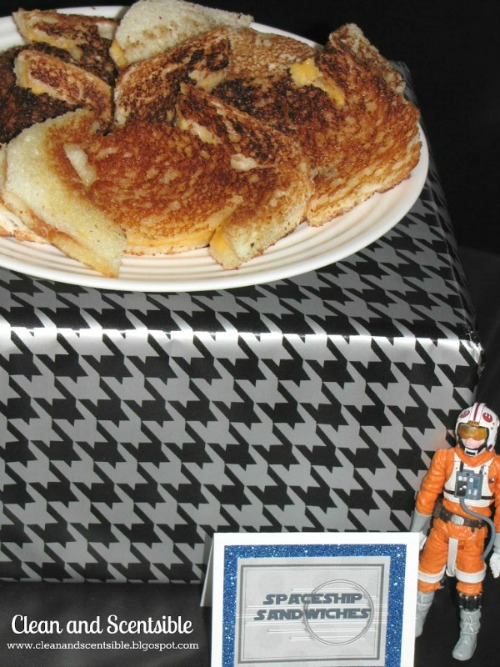 Since Jedi’s love their light sabers, I made up some fruit sabers.  Surprisingly, most of these were quickly gobbled up too! 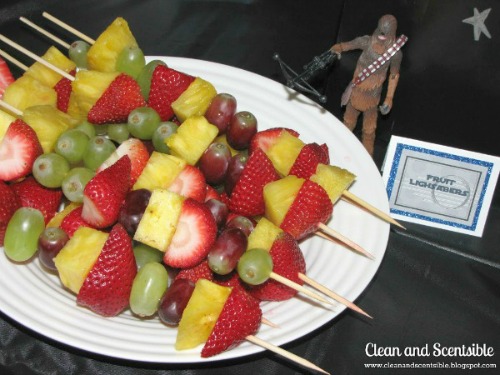 In keeping with the healthy food, I did have a plate of Vadar Veggies but I must say I did have quite a bit of this left over.  What can I say?  I tried. 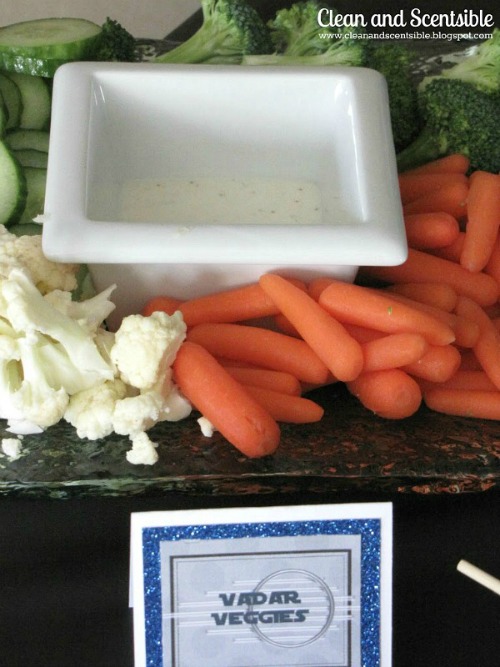 We also had a few little treats on the table to tide the Jedis over until birthday cake time.  Their favorite was the TIE fighter cookies. 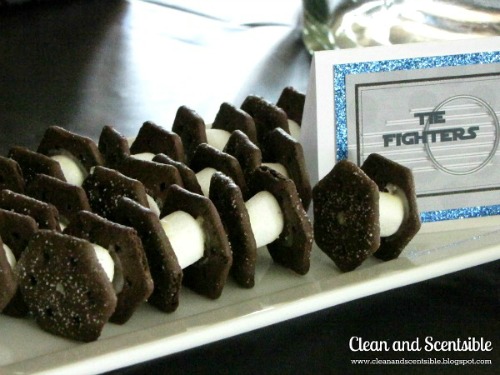 They are made from the 100 calorie Oreo wafer cookie packs, mini marshamallows, and some white chocolate to stick it all together.  They were a yummy little biteful!We also had some Death Star donuts {in chocolate since that is Connor’s favorite!} 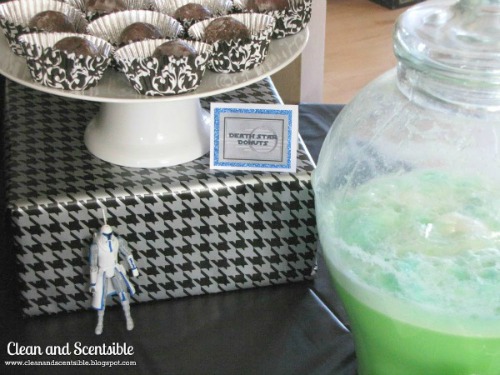 So the big food hit of the party was definitely the Yoda Soda.  I pretty much do a version of this punch at every kids party that I have.  It is quick, easy, and all the kids seem to love it.  Just scoop out some frozen yogurt {in the color of your choice} and add Sprite. 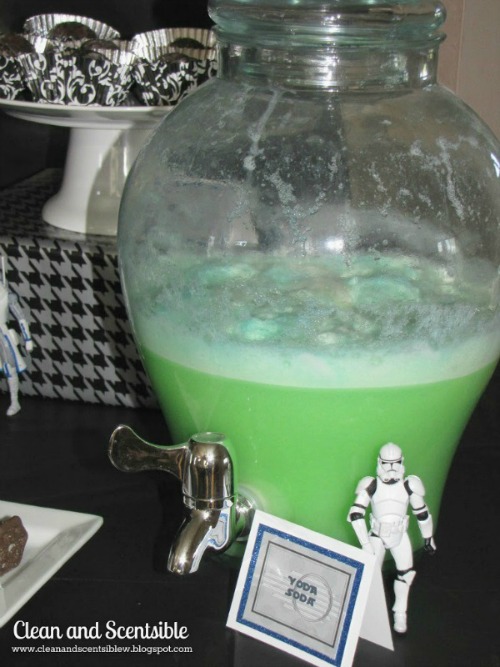 My favorite is raspberry frozen yogurt but I didn’t think my little Jedi’s would be too happy with a pink drink.  Since Connor does not like lime flavor, I ended up using vanilla frozen yogurt and some neon food coloring to tint it green.  Yoda would be proud.In addition to the Yoda Soda, I also had some Galatic Water on the table {and outside where the little Jedi’s were playing} 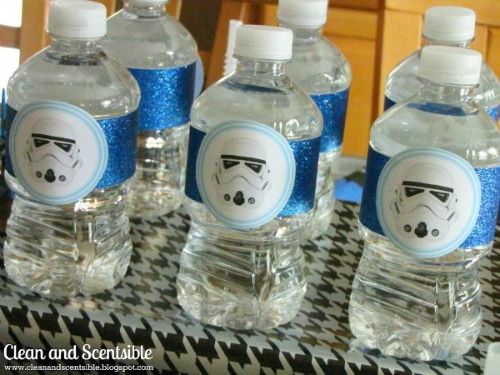 I just took the regular water labels off the water, wrapped them with some glitter paper {that was left over from the light saber invitations} and added the Storm Trooper tag. 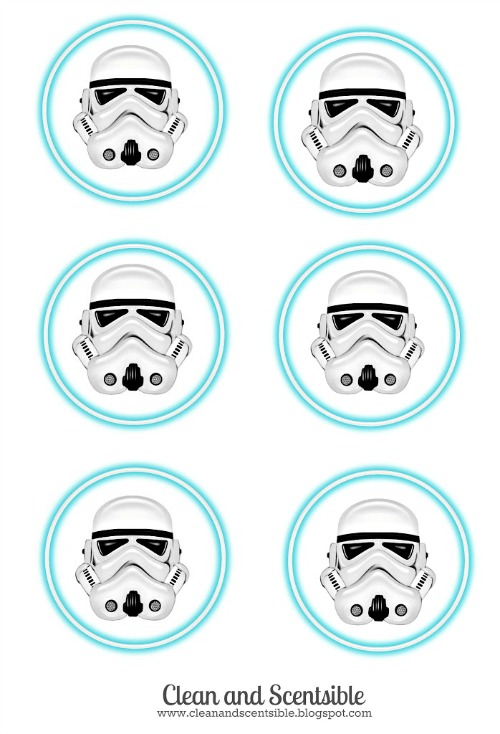 I purchased a Star Wars digital kit from Natalie’s Little Corner of the World and used it for the above water labels and food label tags.  You can also find some links to some free kits here.  Due to a lack of time, I didn’t get as much done with the digital kit as I had hoped, but I am sure there will be many more Star Wars uses in the future!Here are the food labels that I printed up {you can download them HERE} 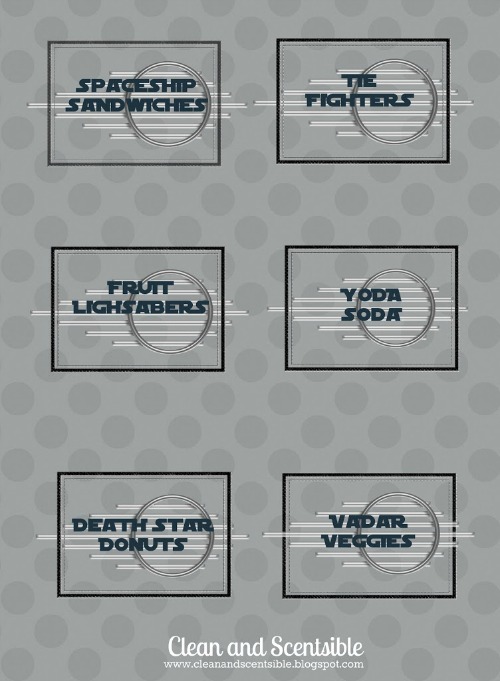 I just trimmed them with a paper cutter, attached them to some of the blue glitter paper with double sided tape and then added that to some folded white cardstock.  We also had some of Connor’s Star Wars men out on  the table guarding the food.Now I am sure you are asking “Where is the cake?” There are so many fun Star Wars cake and cupcake ideas that I actually saved it for the next post.  Head on over HERE to get some great Star Wars birthday cake ideas.If you are looking for other Star Wars party food ideas, here are some of my favorite inspiration posts: 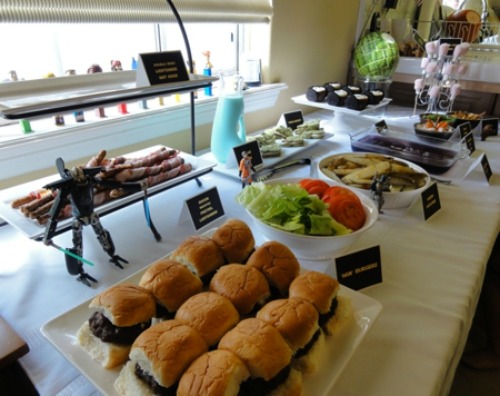 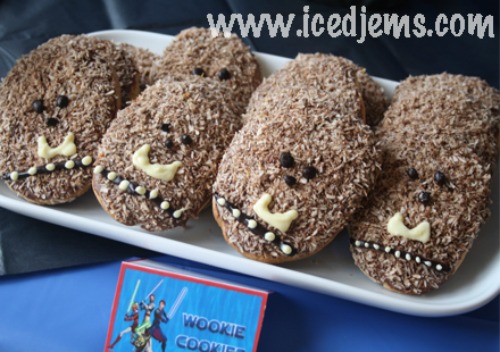 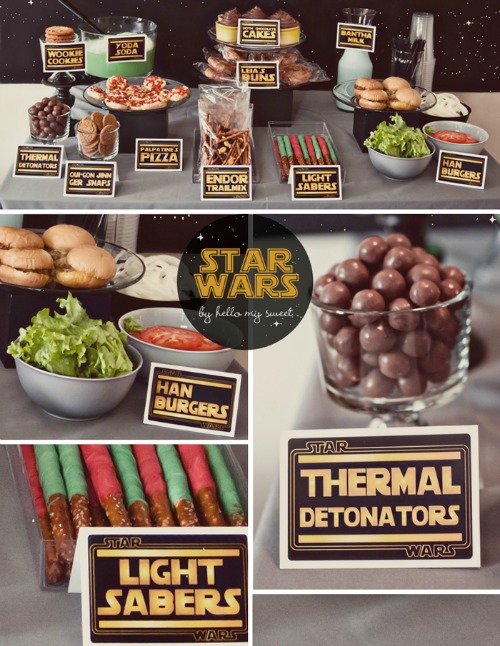 Hello My SweetAnd if you really want to get creative, check out these amazing cookies from The Sweet Adventures of Sugarbelle. 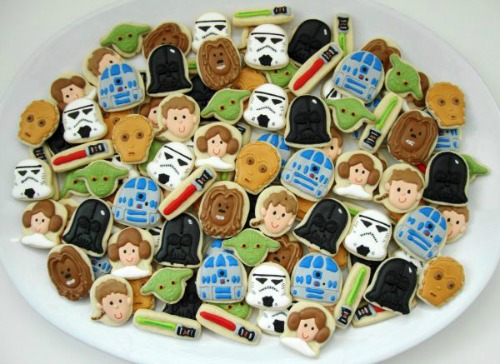 There just also happens to be a link party of oodles and oodles of Star Wars goodies on this post as well.  It came too late for our party but hopefully it will help you out.