With the Lego Movie just being released, I thought that this would be the perfect time to share my son’s Lego birthday party that we had a couple of months ago! 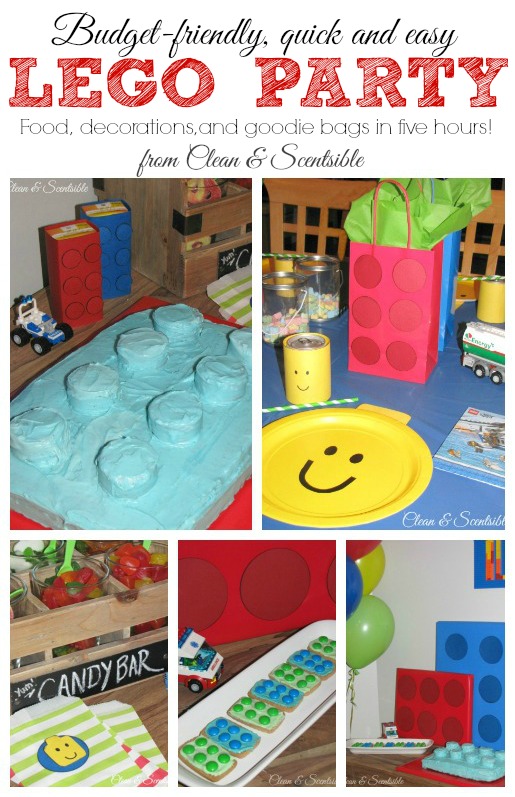 I know that there are tons of amazing and beautiful Lego party ideas out there but, unfortunately, most of them seem to involve a lot of time and planning.   Now I love a good party and have done a few big ones myself, but sometimes, you just need to get things done QUICKLY!  This Lego party came together in about five hours on quite a small budget.  Other than the shopping, everything was done in one busy afternoon – the decorating, the food, the cake, and the goodie bags!  It was nothing fancy, but the kids had a great time and everyone thought that it was pretty cool.   And, really, that’s all that matters, right? 🙂{Since I only had a few hours to get the party together and it was dark by the time I was done, there really wasn’t a whole lot of time for getting any pretty photos!  Hopefully these will give you a good idea though!} 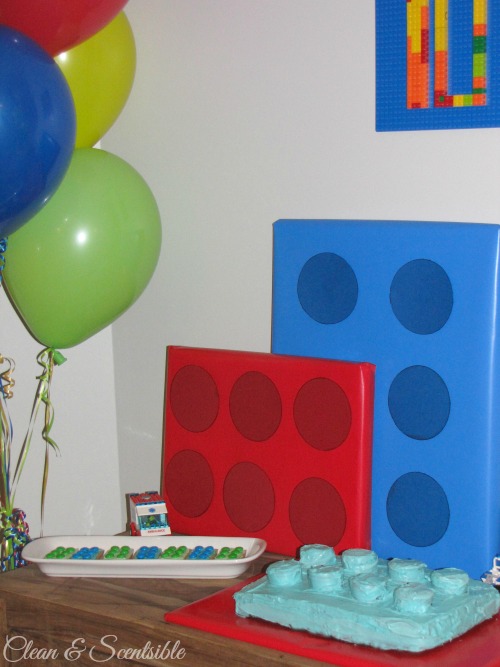 The decorations were kept pretty simple using mostly materials that I had around the house.  The large “Lego Blocks” are made from canvases that I covered in wrapping paper.  I then cut out some circles, inked the edges in black for some definition and stuck them on with pop dots.  My little one made the number 10 sign out of some Lego blocks for me and it provided the perfect pop of color.  I then purchased some balloon in the yellow, blue, red, green color scheme that carried on through the party. 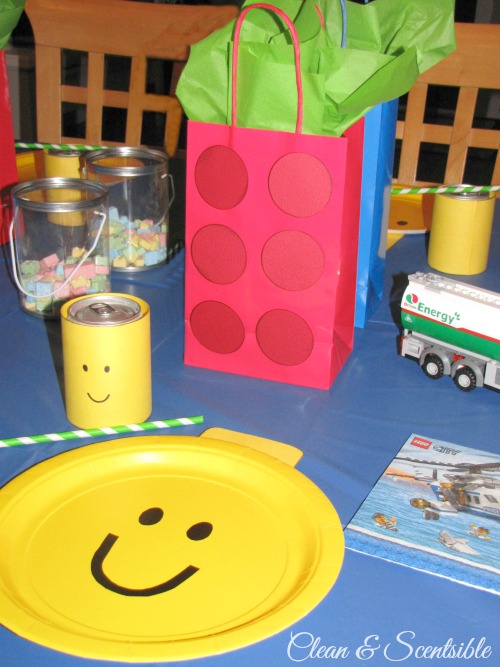 I used the same idea for creating the goodie bags {as well as the invitations} and added a Lego mini-figure bag, some Lego block candies, and a Lego flashlight that I had found at the dollar store.  The goodie bags were all placed in the middle of the table to add some color and height. 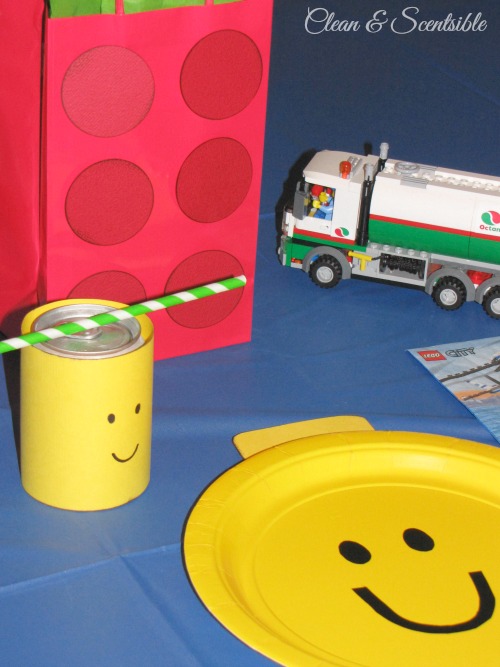 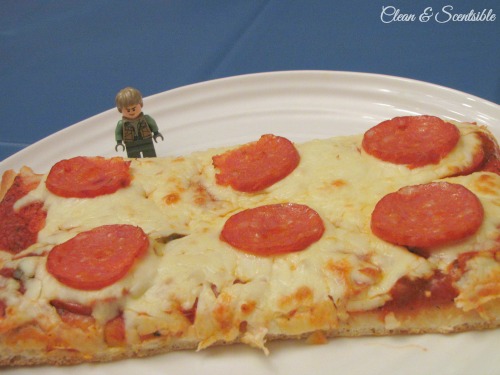 For the food, we made some Lego brick pepperoni pizza with Pillsbury pizza dough. 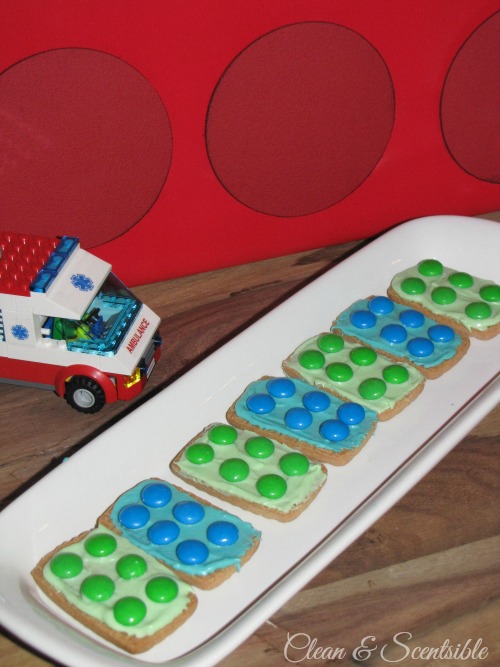 I think the kids’ favorite food was these Lego brick cookies made from store-bought shortbread cookies and M&Ms.  I actually ended up making up more of these! 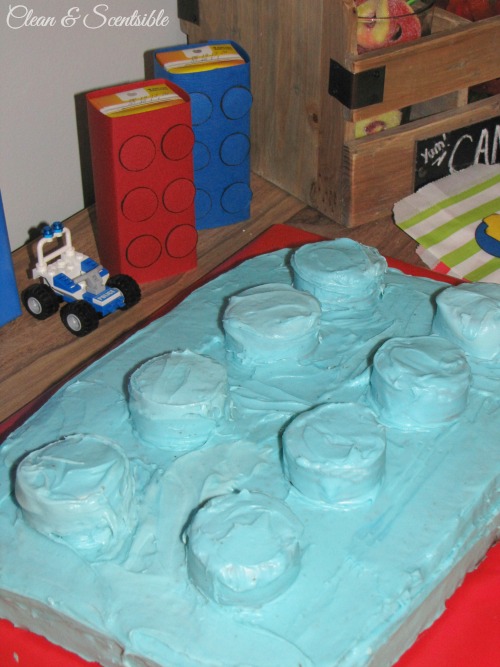 The Lego brick cake was just a regular sheet cake with 2 Oreo cookies added for each of the “pegs”.  I was running out of time a bit by this point so it wasn’t the smoothest icing job.  Good thing 10 year old boys don’t notice! 🙂 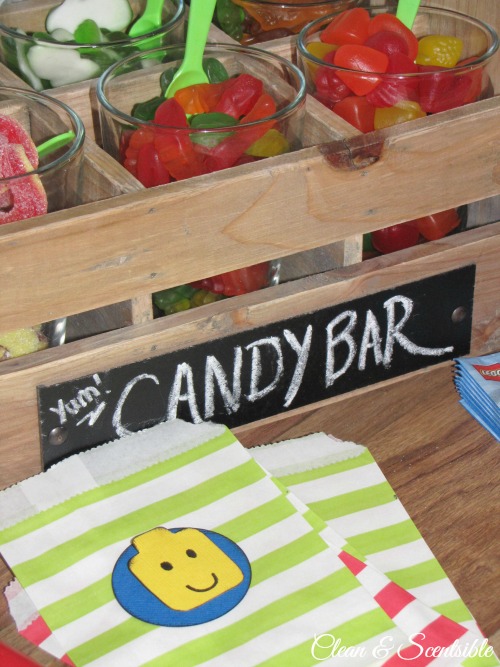 After dinner we took the kids down to a movie and let them fill up a candy bag to take with them.  I already had the bags and just cut out a circle and a little Lego head to dress them up a bit.  We also took the Lego juice boxes {that are pictured above with the cake} for a movie drink.

So there you have it!  A quick and easy Lego party that anyone can do!

If you have a house full of Legos like we do, you might also want to check out these posts! 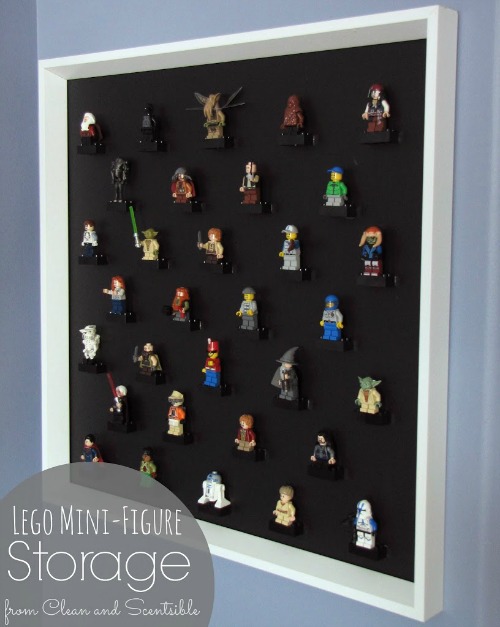 Lego Mini-Figure StorageI shared this post at Liz Marie Blog, Live Laugh Rowe, Under the Table and Dreaming, A Bowl Full of Lemons and Lil Luna.