41shares
This weekend, the boys and I made our own Valentine Gingerbread house using graham crackers – we like to call ours The Love Shack! 🙂

I could not get the B-52’s “Love Shack” out of my head the whole time we were making them.  “The Love Shack is a little old place where we can get together….”  I even sang it to the boys.  They were not impressed…
For the houses, I just used some store bought icing, mixed in some cream of tartar to help it stick a bit better {add about 1/2 tsp cream of tartar to 1 cup of icing}, and about 8 drops of red food coloring for that Valentine’s look!  If you really want to make your own icing you can find a recipe here. 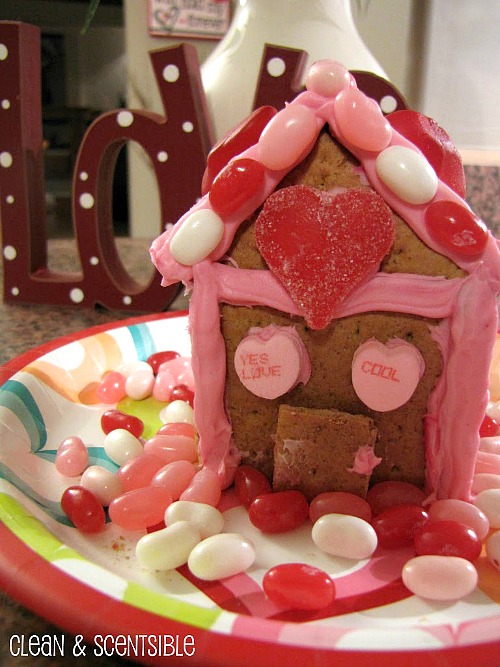 To form the house, you need 7 graham cracker squares.  Cut one of the squares diagonally with a serrogated knife for the front and back of the roof. {hint: place your Graham cracker in the microwave for about 20 seconds before cutting it so it doesn’t crumble} After your have assembled your house, let it sit for about 20-30 minutes to allow time for the icing to set a bit.  Surprisingly, we had no troubles with our houses collapsing {Gingerbread house disasters of Christmas’s past were floating around in my head!}.I put some of the icing in a Ziploc baggie and cut off the corner to pipe the icing around the house.  Matthew added some sprinkes to his {and as many candies as possible that would fit onto the front of his house!} 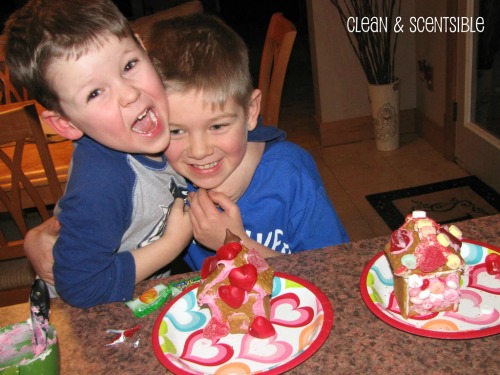 “Love shack, baby!  Love shack, that’s where it’s at!”I think the boys ate more candy than they actually put on their houses but apparently they had fun! {And yes, they are total goofs!} 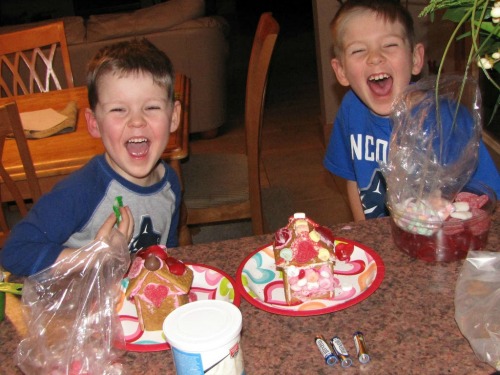 So grab a few graham crackers, lots of candy and head on down to theLOVE SHACK! 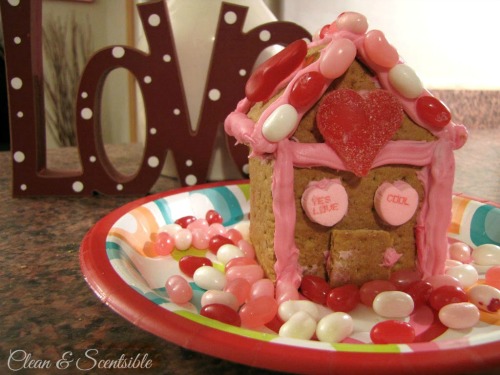 “Bang, bang, bang on the door baby!”This would be a fun activity to do for a Valentine’s Day party too!