130shares
Well, we have organized our cupboards, cleaned our microwaves and dish washers, and beautified our fridges. Now it is time for the last big task this month – cleaning the oven! 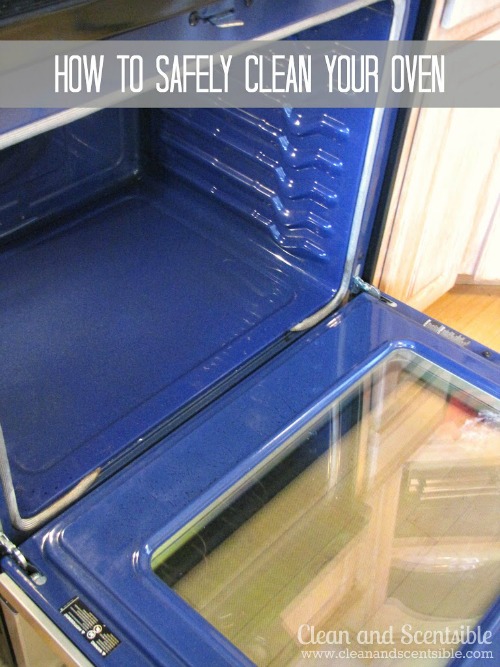 Not only does this task tend to be one of the most dreaded cleaning tasks in the kitchen it can also be the most harmful.  Chemical oven cleaners are one of the most dangerous household chemicals on the market.  Oven cleaners that contain soduim hydroxide or potassium hydroxide {lye} are extremely corrosive and can be deadly if swallowed.  They can also cause chemical burns to the skin or damage your lungs if the fumes are inhaled.  Not really what I want to be using on my home…Okay, so then there is the self-cleaning oven option that many of us have on our ovens.  Unfortunately, this can also be harmful to us and our pets {especially birds}.  Oven temperatures will get up to 900 degrees Fahrenheit during the self-cleaning cycle releasing fumes into our homes {as well as all of the grease fumes from the oven!}.  Most manuals will advise you to only clean your oven in well ventilated areas with the windows and doors open and to relocate birds and other small pets to other areas.

So the last option is to go the green cleaning route! 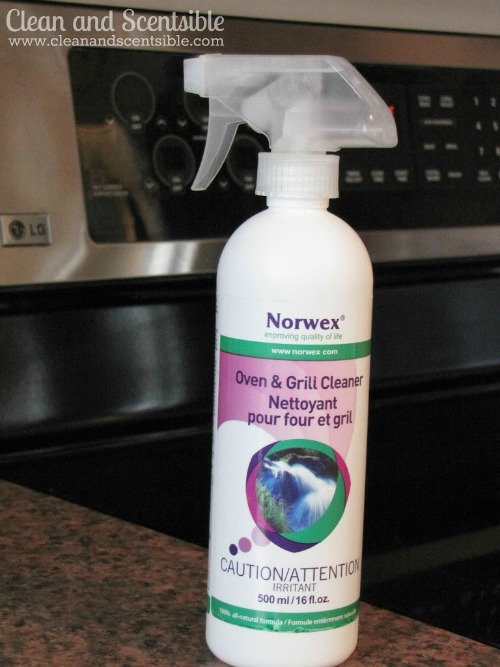 For the last few years I have been using the Norwex Oven and Grill Cleaner to clean my oven and have been quite happy with the results. It’s quick and easy to use and doesn’t involve a lot of “elbow grease” on my end. It is a water-based, all natural and biodegradable cleaner that is non-caustic.  There is still a smell associated with it when you first spray it so you do want to make sure you don’t inhale as you spray!Lately, I have read a lot of positive feedback from cleaning the oven with baking soda and vinegar so I thought that I would give it a try this time around…Here is the {not so pretty!} before picture of my oven. 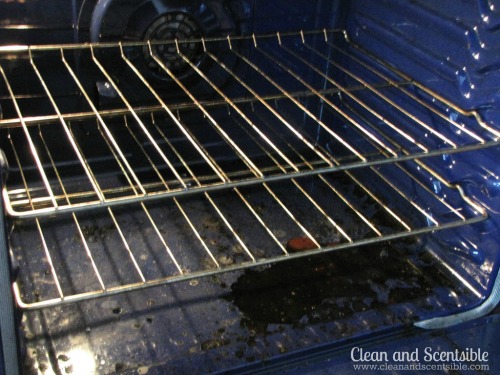 For those of you following along on Facebook, remember when I told you how wonderful it smells to put a capful of vanilla in a coffee mug and pace it on a cookie sheet in the oven?  Well this is what happens if you do not have a cookie sheet and dump the vanilla when you are taking it out…

What you need to do: 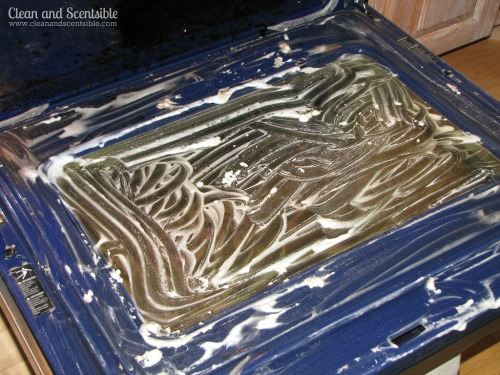 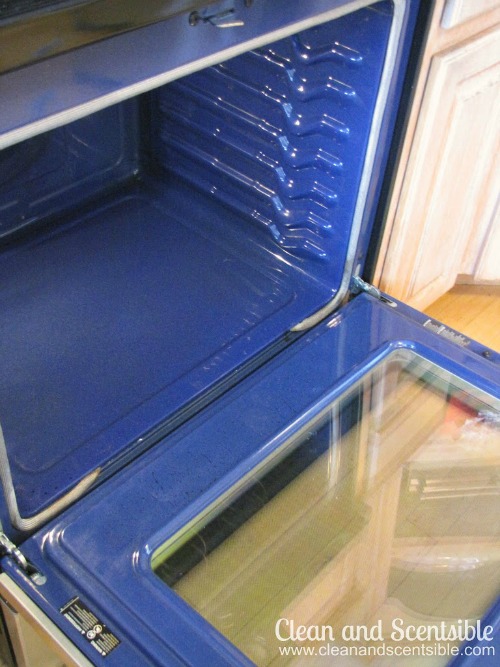 And here is the after shot – not perfect but SOOO much better!

**EDIT: I have had a number of people mention about putting aluminum foil on the bottom of the oven to catch drips and spills.  Make sure you check your owner’s manual – this cannot be done with convection ovens!!** Now while you are waiting for your baking soda mixture to sit and do its thing, there are a few other jobs that you need to do.  Clean the hood
First up, boil a pot of water so that the steam goes up and loosens up all of the grime on the stove hood.  You can even add some lemon juice if you like. 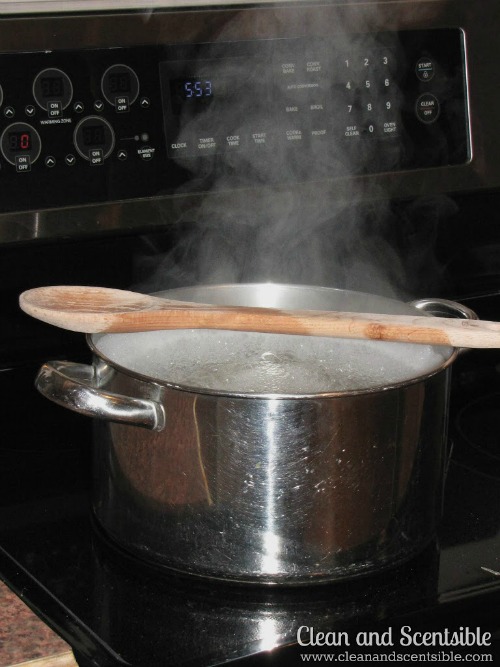 Here is one of my favorite tricks when boiling water.  Did you know that if you put a wooden spoon across the top of your pot, it will help prevent it from boiling over?  I have no idea why this works but it totally does and has saved me from lots of stove top messes!Now that the hood is all moist from the steam, give it a good wipe down with a microfiber cloth.  {I then shined it all up with my window cloth} Wipe down the wall behind the oven as well using warm water and some dish soap. Clean the Oven Racks
This is actually my least favorite part of cleaning the oven.  I filled a bowl with some dish soap, wet a microfiber cloth, and ran it along each of the rungs on the rack.  I also mixed up a little paste of cream of tartar and hydrogen peroxide to use on the extra burned on, dingy areas.  It didn’t really seem to do any better a job than the baking soda paste that I had used before but maybe I just didn’t have enough patience with scrubbing.Clean the Stove Top
We have a glass top stove and I have tried a ton of different products to clean it.  I pretty much hate cooking with the stove light on as all of the little marks drive me crazy!  The best thing that I have found is a combination of the Norwex Micropad and Window Cloth.  This is one place that I do not like to use baking soda as the residue seems to take forever to get off.  If you want to get really fancy, you can also pull out the oven from the wall and clean behind it!  So, do you have any great tricks for cleaning the oven or stove?  Leave your ideas in the comments below – I would love to hear them!
UPDATE: If you have a steam cleaner, see how quick and easy you can clean your oven HERE… 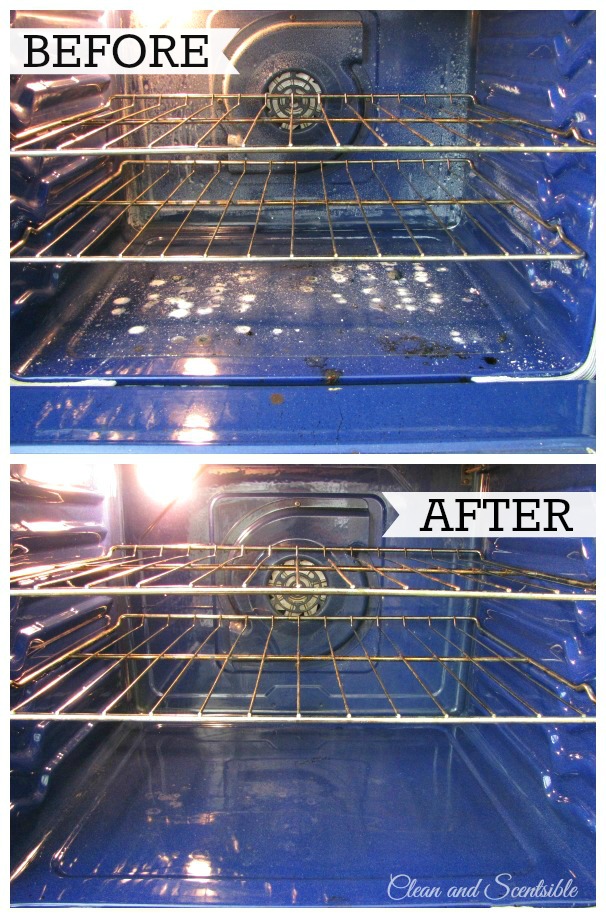 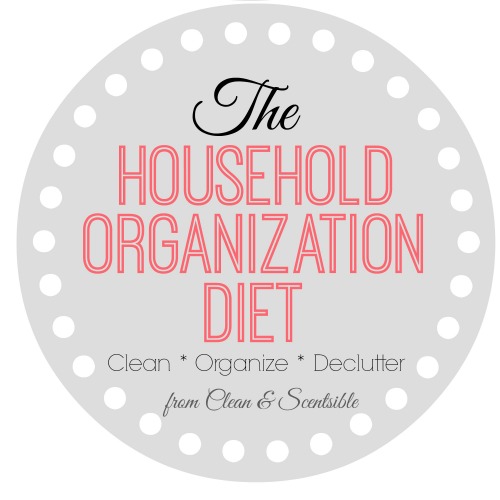 For more kitchen cleaning and organizing inspiration, check out these posts… 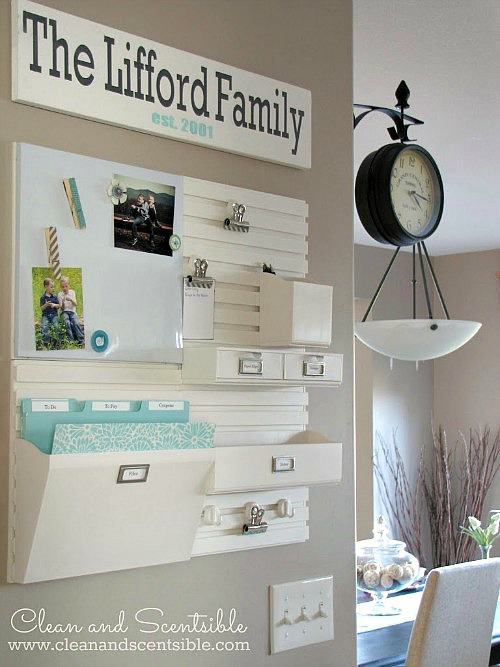 How to Organize a Kitchen Command Centre 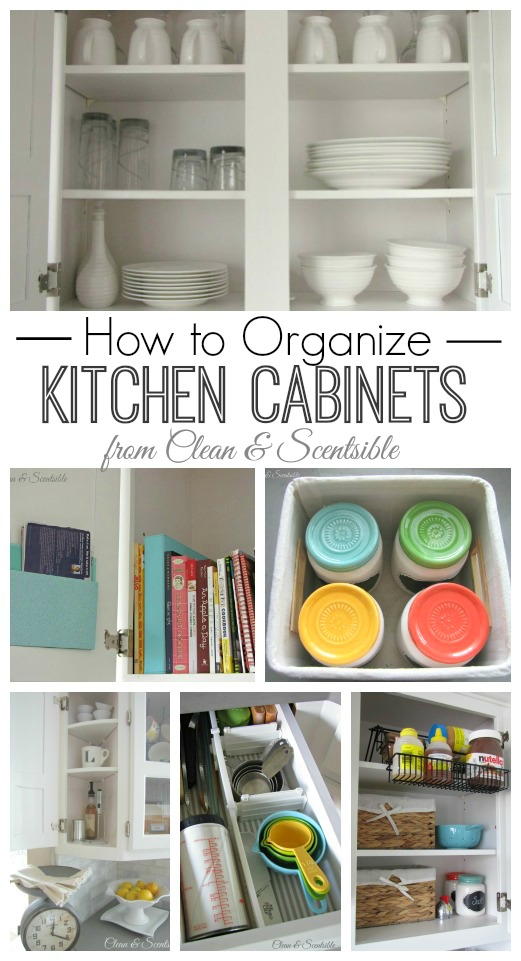 How to Organize Kitchen Cabinets