So I’m totally going to be switching gears from my fall home tour yesterday to a couple of fun Halloween posts today. 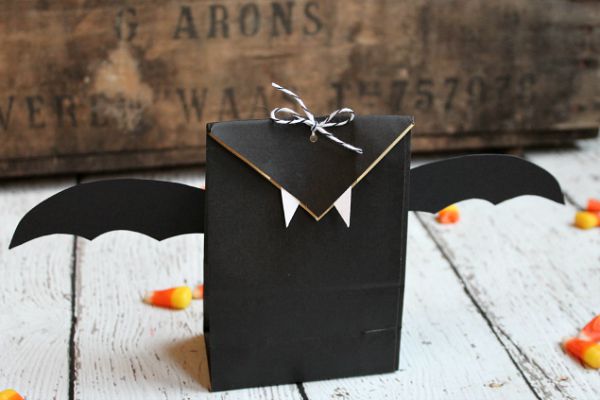 First off, I am over at Eighteen 25’s Spooktacular Series today sharing these cute {I mean spooky!} bat treat bags.  I have loved this series every since I first started blogging and was so excited to be able to join in this year!  There is always a ton of fabulous Halloween inspiration – from treats and food ideas to crafts and Halloween decor – so make sure you head over for a visit! 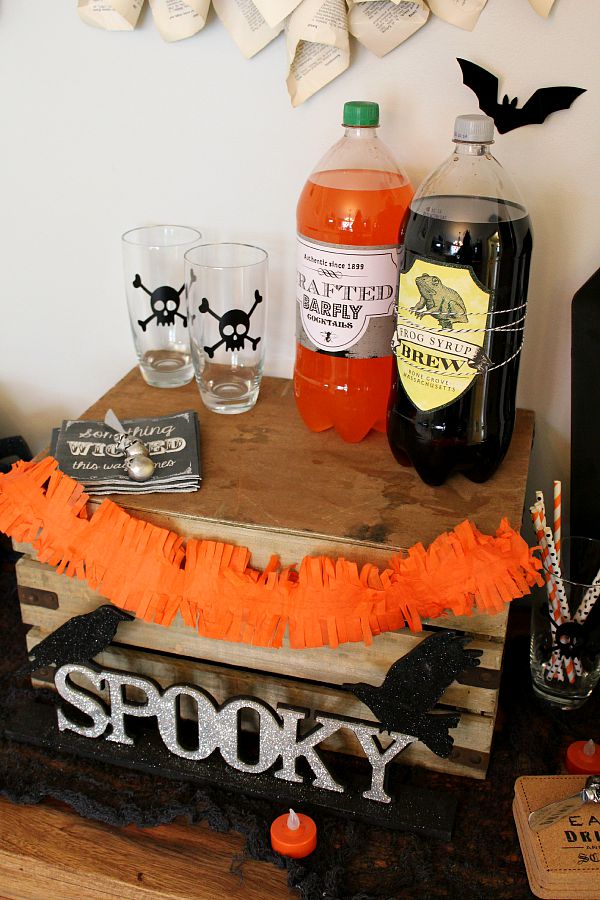 I also wanted to share some fun Halloween party ideas with you.  This is actually last year’s party, but since I didn’t have time to get it up before Halloween, I saved it for this year.  It gives you lots of time to party plan! 😉 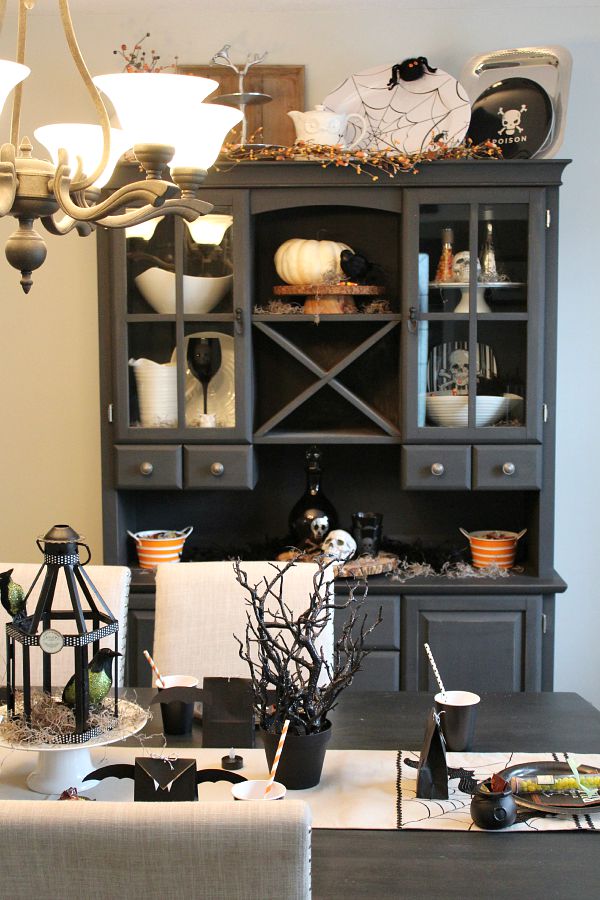 Now that my boys are getting older (they were 7 and 10 last year), it was actually kind of fun to do some of the party decorating with them.  They didn’t last the whole time, but they did enjoy pulling everything out of the storage bins and had some rather “creative” ideas.  I did a fair bit of tweaking after they went to bed, but I think that they were rather pleased with their work. 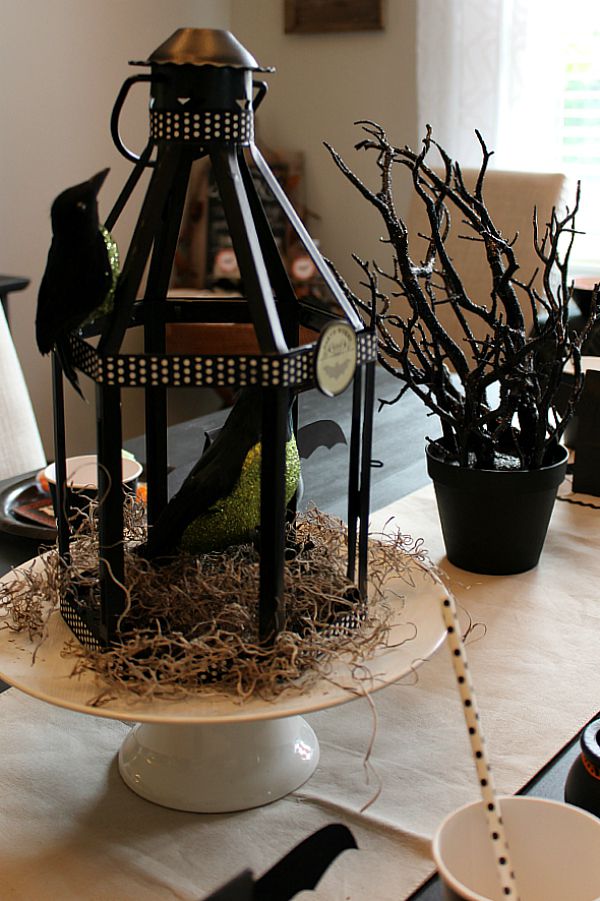 I made this spooky crow’s cage a few years ago from a broken lantern that we had, and it worked well for the centerpiece. 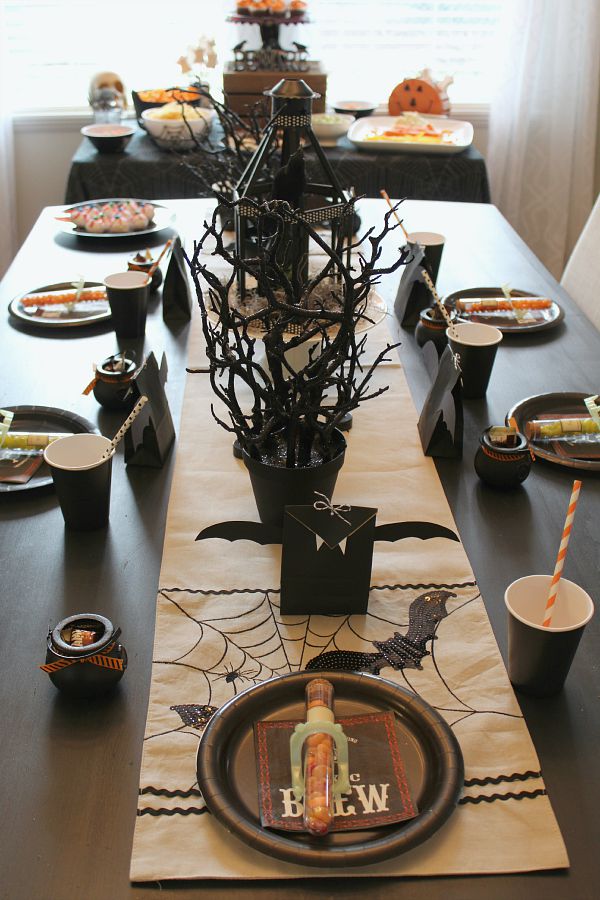 For the place settings,we had some test tubes filled with witches’ teeth, some glow in the dark vampire teeth, a mini caldron with a couple of chocolates, and the bat treat bags. 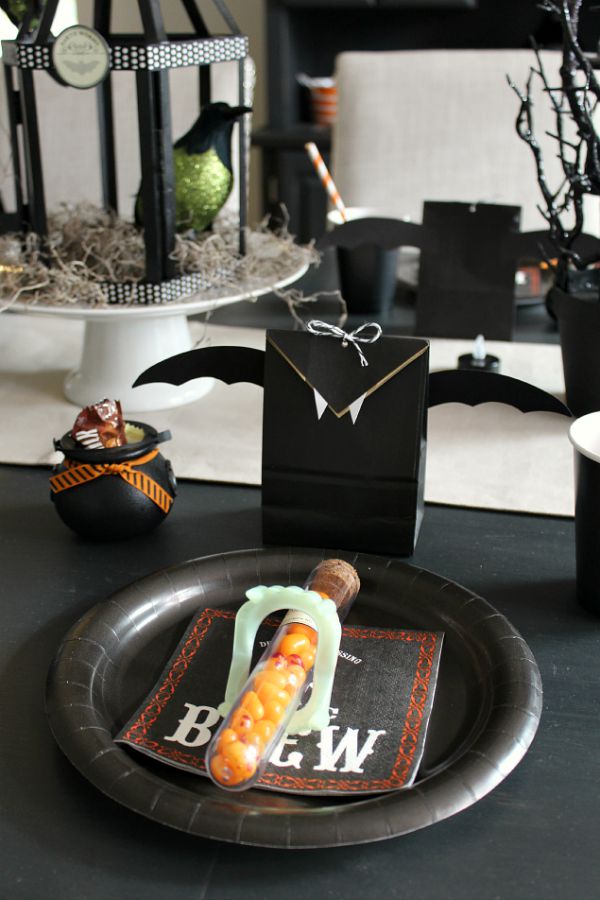 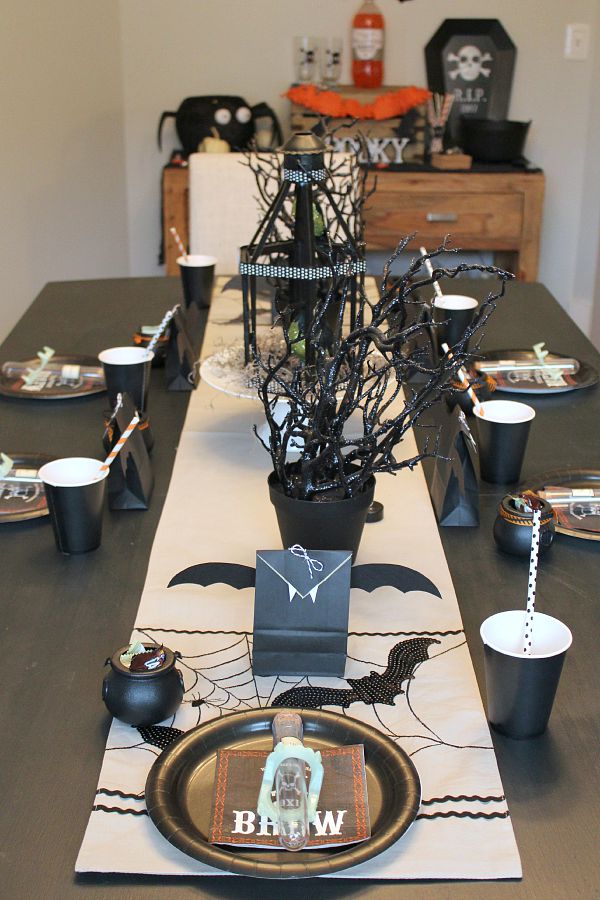 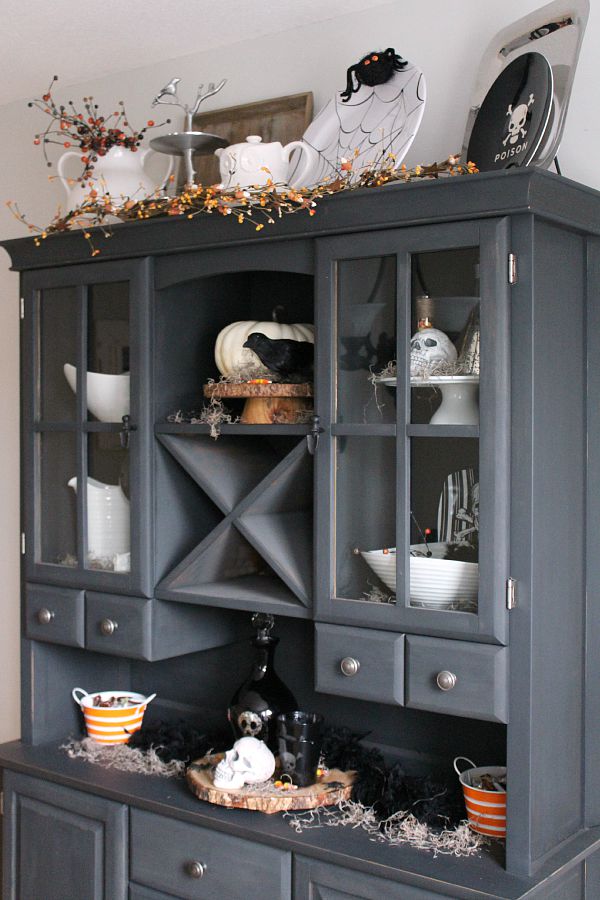 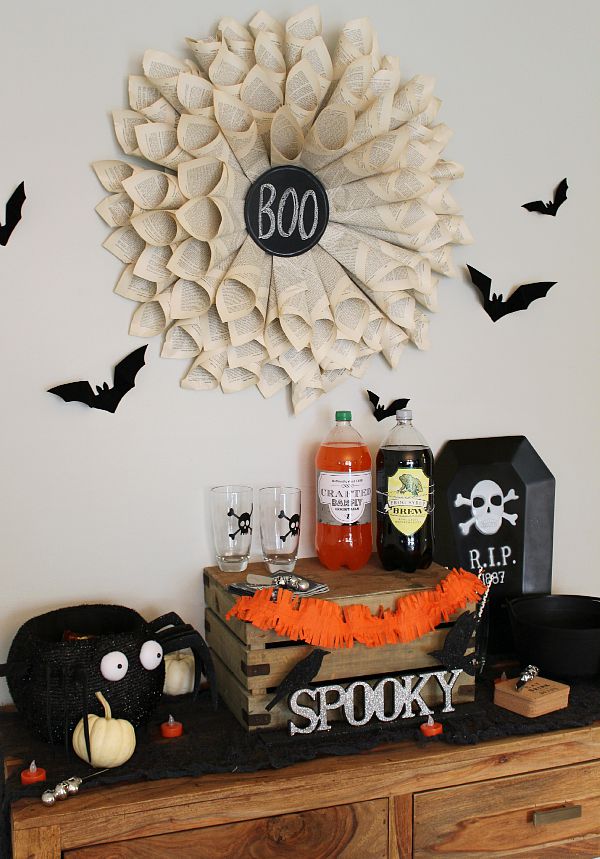 For the drinks we had pop and juice that I covered up with these drink labels.  I attached the frog label with some baker’s twine so I could remove it to use again for Halloween decorating or future parties.

I also mixed up some witches’ brew in the caldron {I didn’t get a chance to get a photo but you can see what it looks like here at one of our past parties}.  My kids LOVE this punch and it has pretty much made an appearance at every kids party that we have ever had.  It’s basically just a couple of cups of sherbert {using whatever color you would like it to be} mixed with soda.  We usually use Sprite or 7Up but really any fizzy drink will work.  It fizzes up nicely and really does look like a witches’ brew! 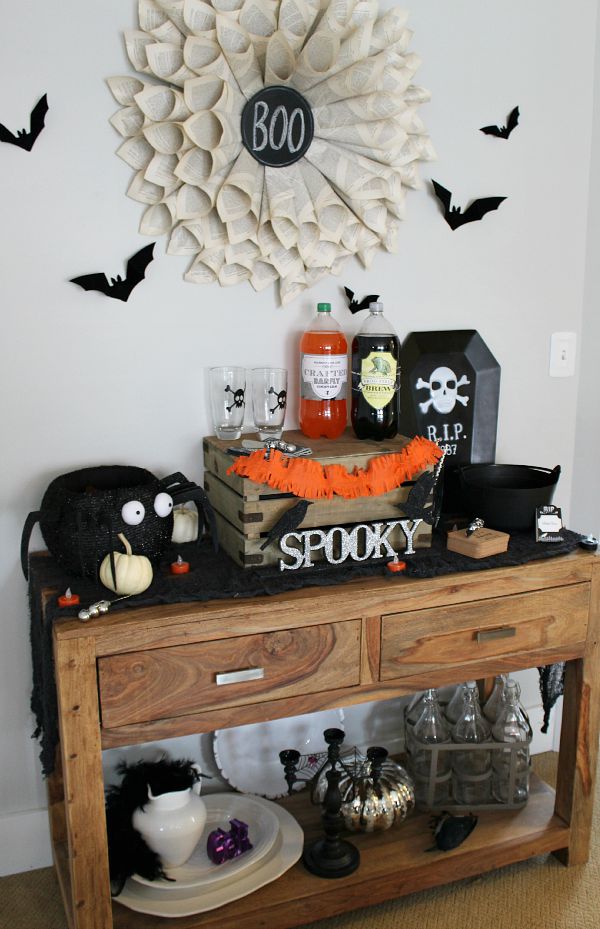 We kept the food fairly simple and just had mummy dogs {weiners wrapped in crescent rolls} for our main course.  The kids were so fast at gobbling these down that I didn’t get a picture, but I did manage to snap a few pictures of some of the other food. 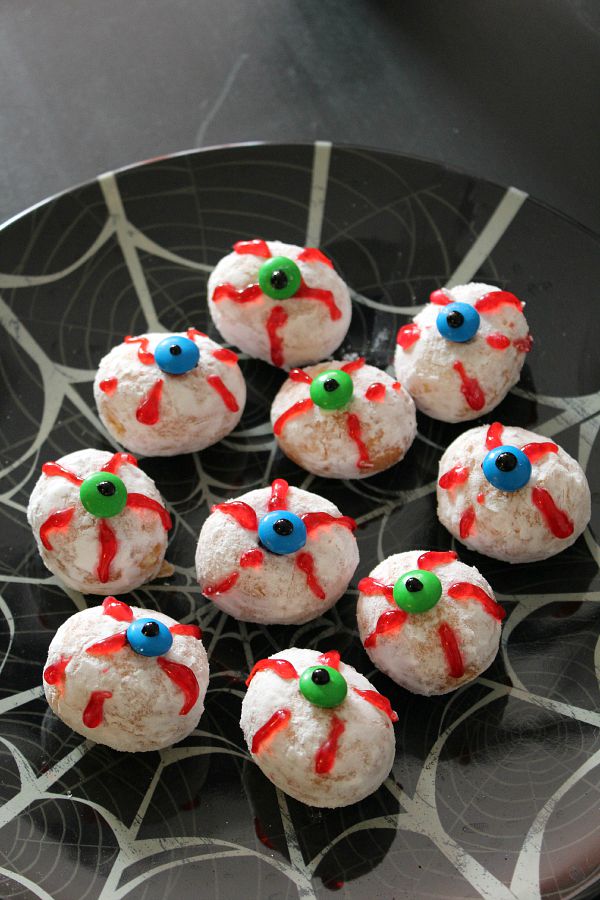 These eyeball donut holes were a big hit and were super simple to make.  You just need some powdered donut holes, M&Ms, and red and black food gel.  You just don’t want to make these too far ahead of time or the gel starts to bleed {no pun intended!}. 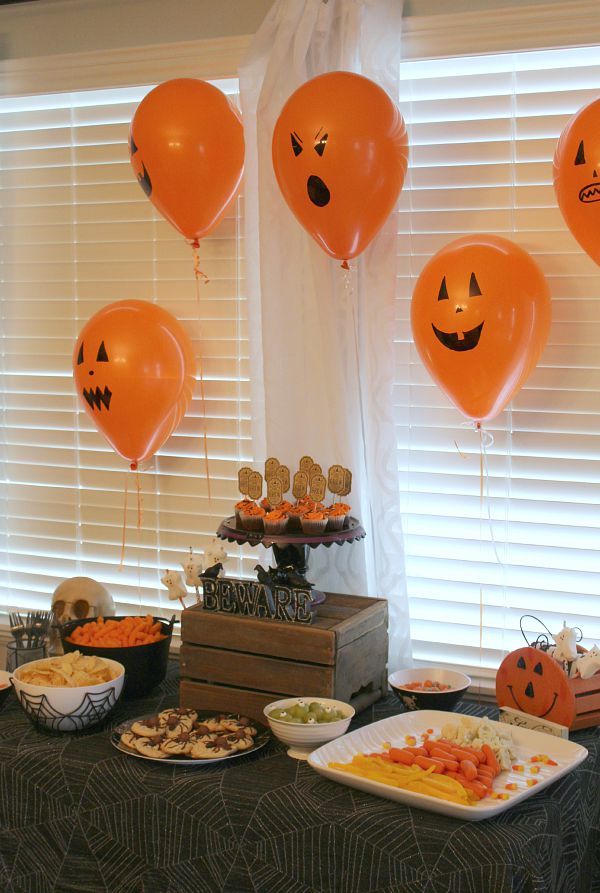 We used some balloons to decorate up the table and managed to only pop one when we were drawing the faces on. 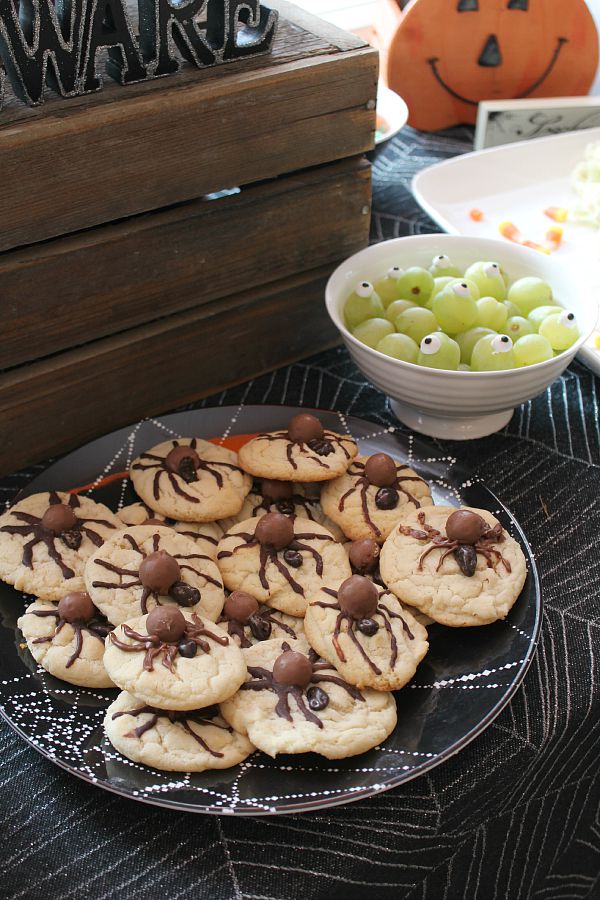 My Mom actually made the spider sugar cookies using a raisin for the head, a chocolate ball for the body,and chocolate piping for the legs.  To make the grapes a little spookier, I added some candy eyes to a few of them using a little dab of cream cheese.  I think they were one of the first things gone! 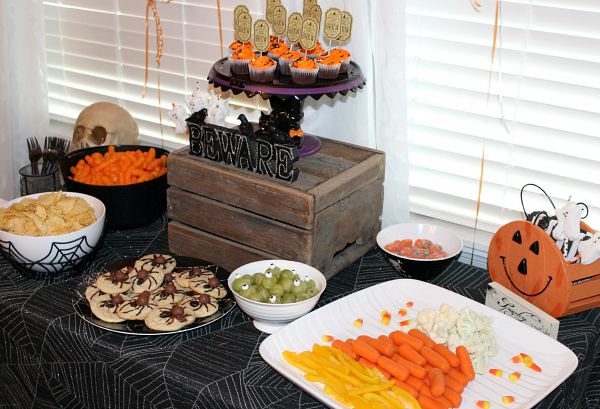 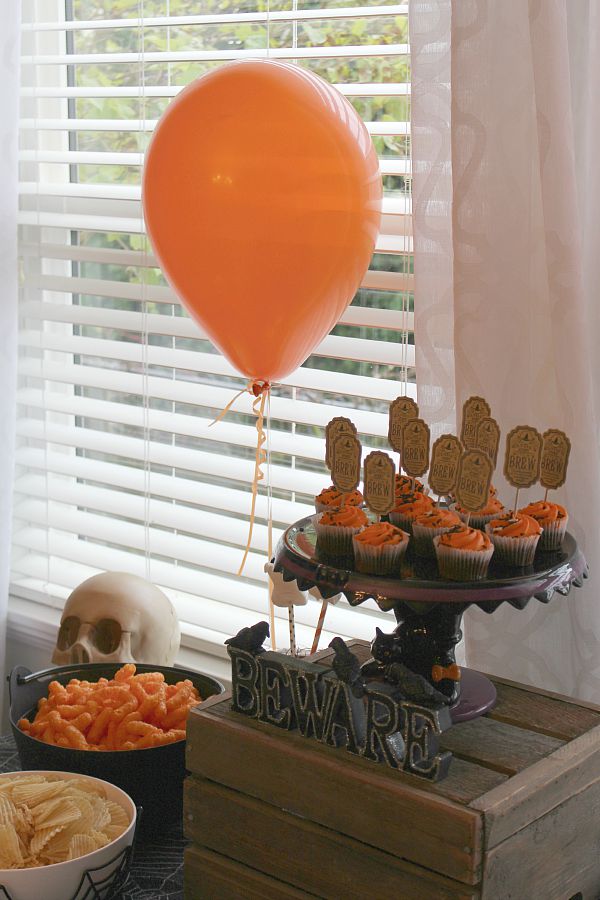 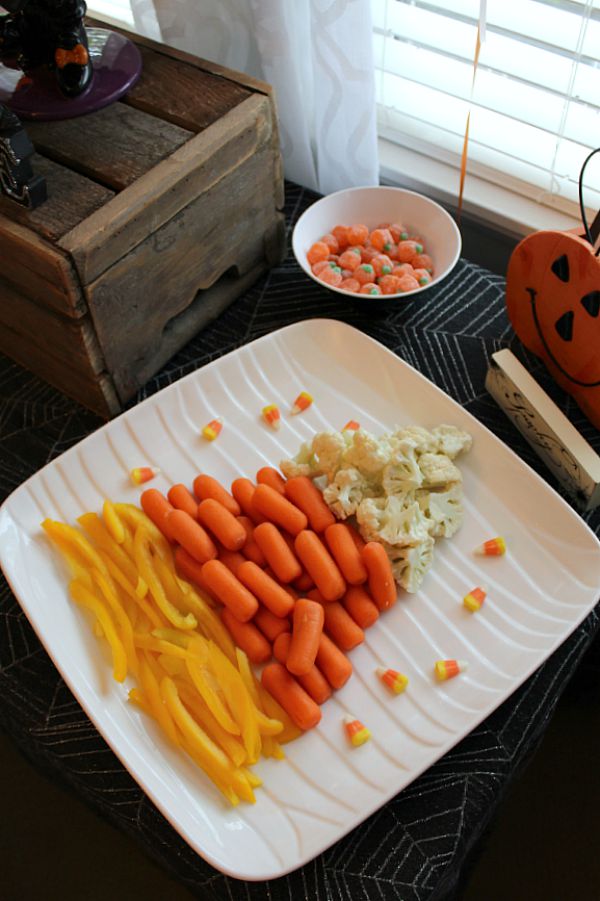 The candy corn veggie tray was one of my favorite things at the party but let’s just say that there were a lot of yellow peppers left over at the end of the party! 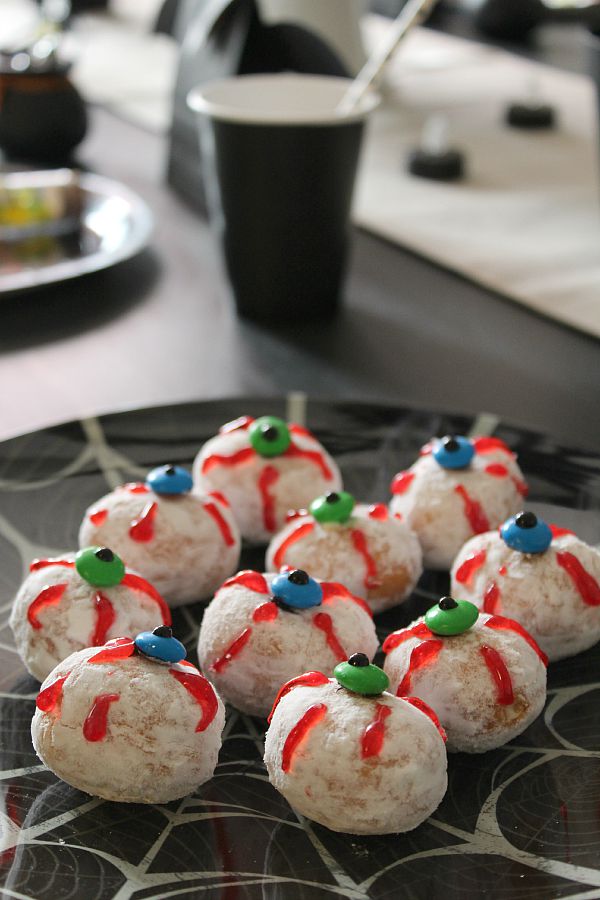 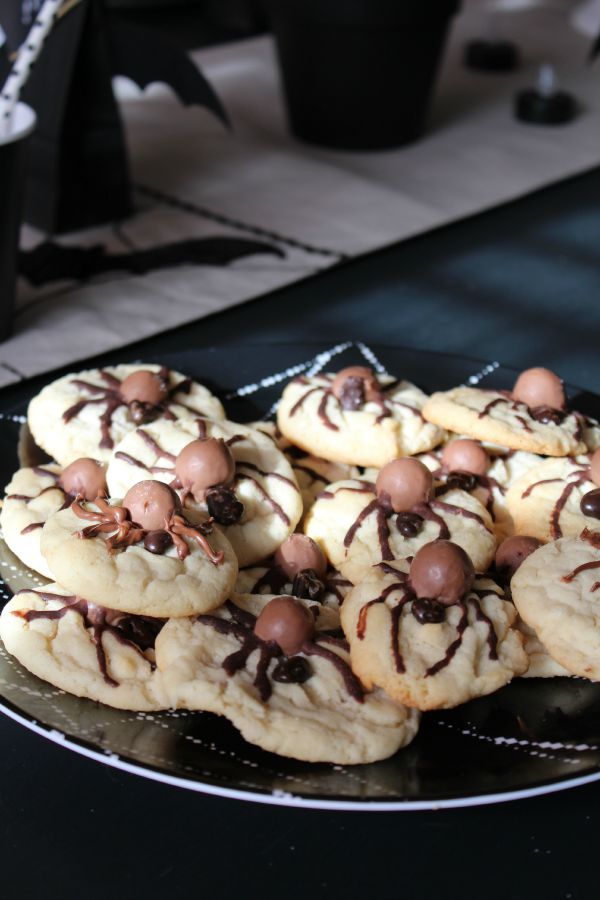 Hopefully that provides you with enough Halloween party inspiration to start planning your own!  Even if you don’t want to throw a big bash, it still makes for a fun family night after picking pumpkins!  My kids weren’t really into the party games last year, but if you are looking for party game and craft ideas for younger kids, head over to this post.

For more Halloween ideas, check out these posts… 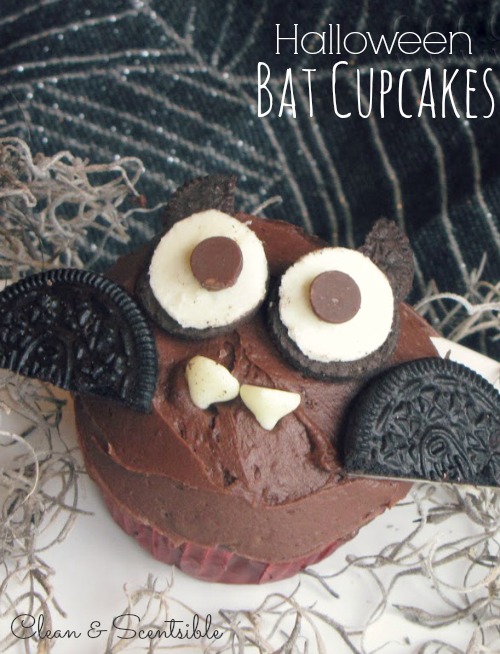 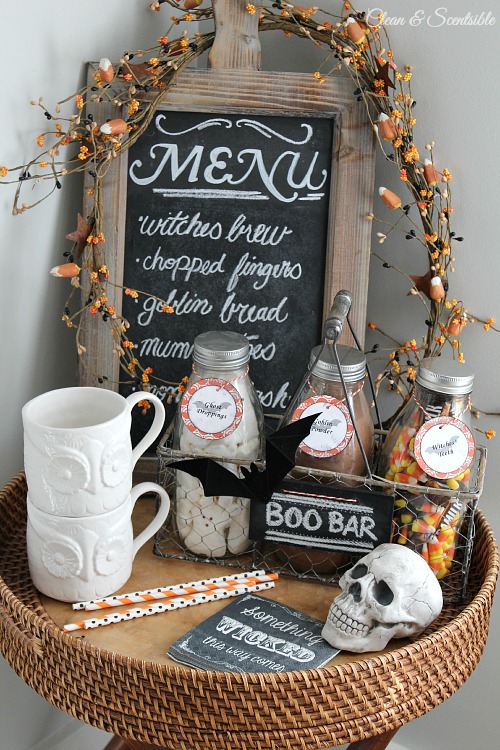