Meet the newest addition to our family – Sammy Swiffer!  I’m sharing his story today along with some important questions to ask when adopting an adult dog.  {And I’m sure you’ll figure out the reason for the name too!} 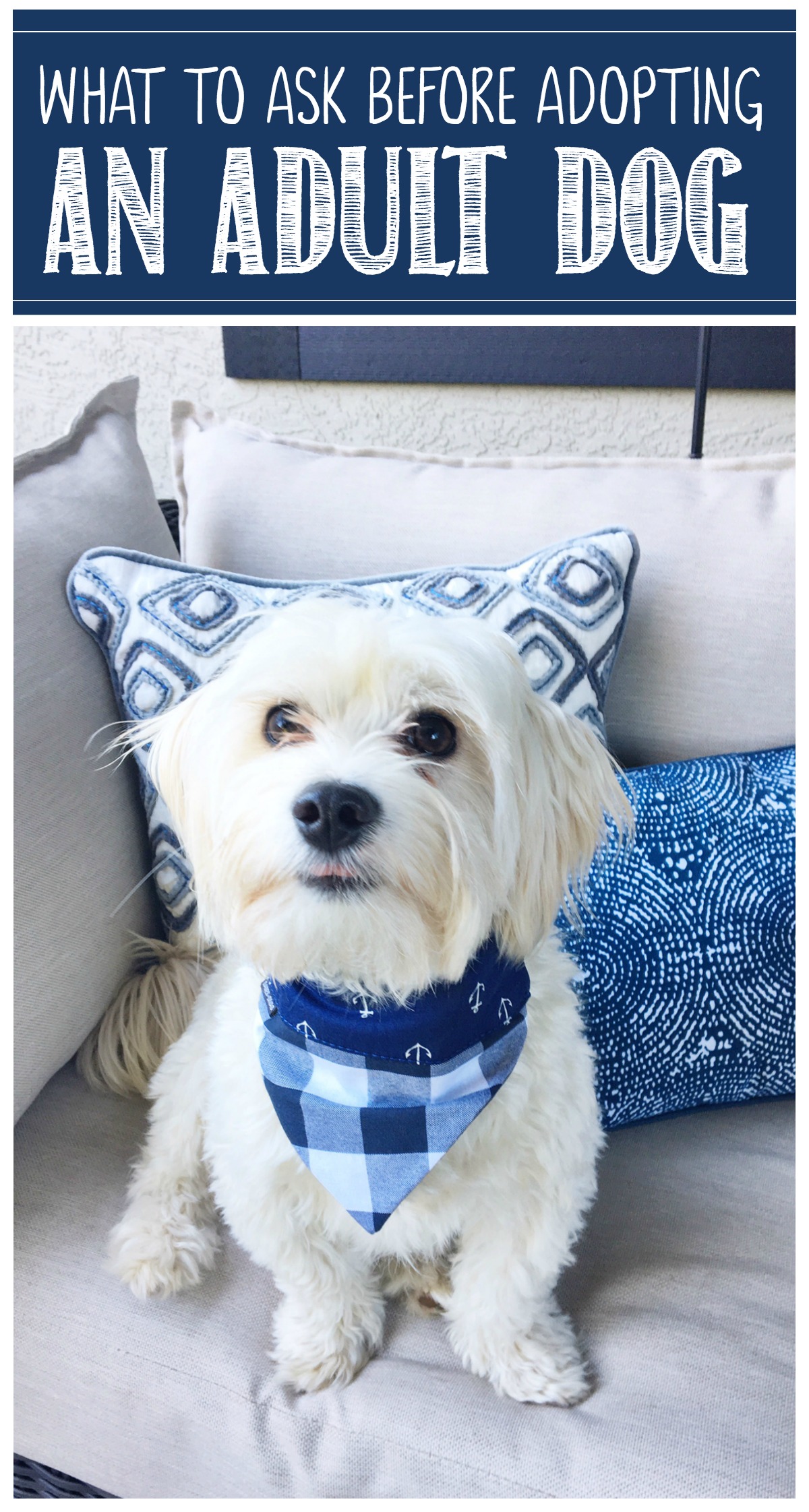 At the end of August, I had the opportunity to head down to Los Angeles with Swiffer and the rest of the Swiffer Fanatics Team.  It was basically a chance for us to learn more about Swiffer’s products, get a few sneak peeks at some exciting new products launching soon, and put that “Swiffer power” into action throughout L.A. 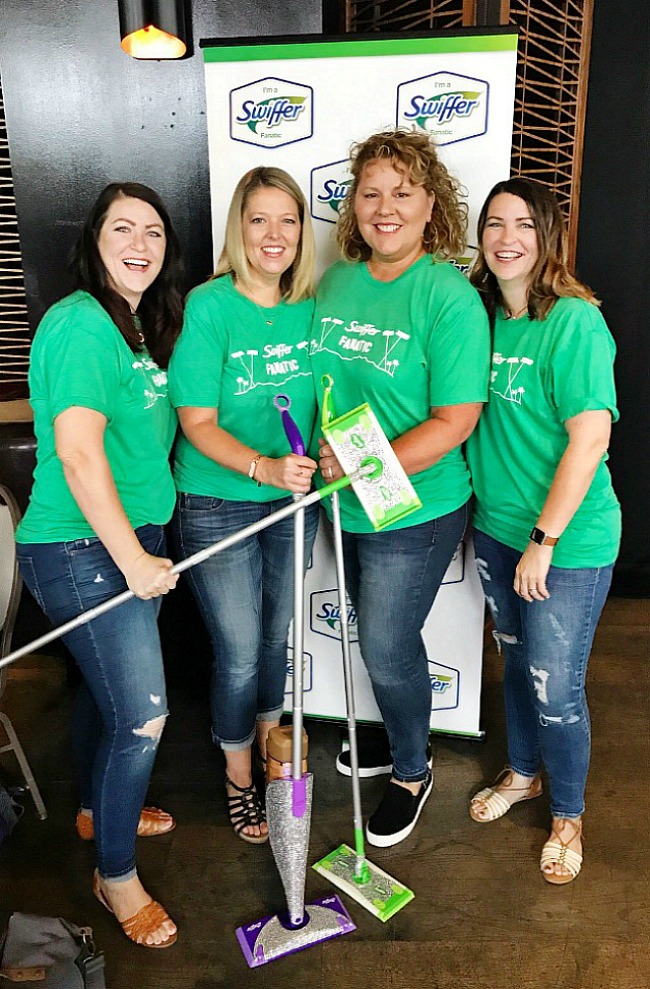 Our morning was spent with the Swiffer research and development team learning about some cool new products.  I’m not able to share quite yet, but you’ll be the first to know when they launch. Swiffer is constantly working on expanding and improving their products and really do take the consumers’ input to heart.  Reach out to them on Facebook or Twitter to tell them what you love or ideas you have for new products or changes.  It can make a difference!

After our morning session, it was time to hit the town! Our first stop was to Michelson Found Animals Adopt and Shop in Culver City.  Adopt and Shop is a wonderful non-profit organization committed to finding “forever homes” for their animals while reducing euthanasia in other shelters.  Other than adoption services, they also offer pet training, grooming, microchipping, doggie daycare, and a huge shop for pet food and supplies.  If you live in the area and have pets, it’s a great place to shop and show your support for the animals! 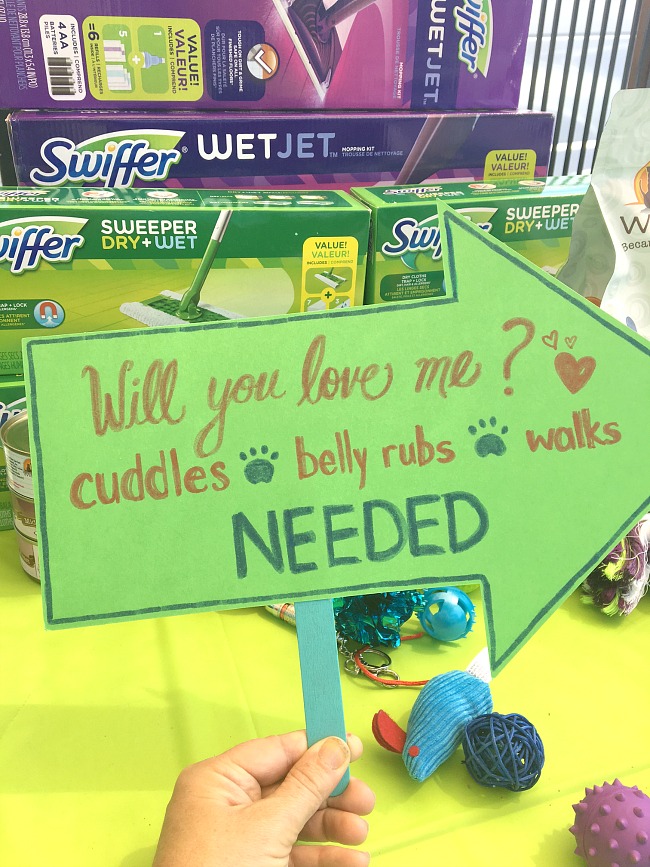 I first saw Sammy when we were given a tour of the facility.  He was all cuddled up in his kennel with another dog, and I just felt like he should be mine.  It was a totally crazy thought though, so I didn’t think much more about it and completed the tour.  Afterwards I spent some time playing with a few of the new kittens and almost didn’t make it out to the outdoor dog run.  By the time I finally got there, there was only one dog left – Sammy!

That must have been a sign, right?  I decided to give Dave a text to see if I could adopt him.  Now most people would tell me that I was crazy to add a THIRD dog to our family – especially since I was in a different country and in the middle of a business trip.  Dave just texted back “Okay.”  I guess he’s used to my crazy ways!  I think he’s a keeper.

What to Ask Before Adopting an Adult Dog

There are many benefits of adopting an adult dog over a puppy. Yes, yes, yes.  I know puppies are super cute.  BUT they are also a ton of work and their adorable puppy stage really doesn’t last that long.  Adopting an adult dog means that you’ll likely get to skip the chewing and housebreaking stage and will have a better understanding of his personality traits before you bring him home.  They are also just as loving as puppies, and truly can bring so much love and joy to your home.

Dogs are definitely a time and financial investment, but they will return your love 10 times over. if you’re thinking about adding a new pet to the family, take some time to consider if you could give an adult dog a home.  They need a forever home just as much as those pudgy little pups and are so grateful!!

Here are some questions to help create a successful adoption…

What is the dog’s history?

Be sure to ask the full known history of any dog that you’re hoping to adopt.  Why is he up for adoption or in a shelter?  Is there any history of abuse or neglect? Where did he come from? Are there any health concerns?   While there might not be a full history available, any information you can get is helpful. Many shelters will also include a “wellness” check at participating local vet offices to ensure that there are no underlying health concerns that they are not aware of.

What is the dog’s personality?

One of the best things about adopting an adult dog is that you’ll have a better understanding of your pet’s preferences and quirks.   The adoption agency can let you know basic personality traits such as energy levels, how they like to play, if they like to cuddle, and how much attention they need.  Matching your new dog’s personality to your family’s personality and lifestyle is essential for a successful adoption.  Whatever you do, don’t adopt on looks or breed alone!

Has the dog been around children?

Check to see if the dog has previously been in a home with children or is at least accustomed to children {and what age the children were}.  Kids can have unpredictable and rapid movements that can frighten some dogs – especially if there is any history of abuse in the dog’s past.  Take some time to interact with the dog around your children.  Does he mind being touched? How does he respond to sudden movements?

Are there any behaviour problems?

Remember that all dogs in a shelter have been through some level of trauma to get there.  Minor behaviour issues are to be expected, but look out for any history of extreme behaviours that you aren’t prepared to deal with or any history of aggression.

Does he get along with dogs and/or cats?

Obviously this is an extremely important question if you have other dogs and cats at home, but it’s also helpful to know for general socialization.  If your dog does not like other dogs or is fearful of other animals, you’ll definitely want to know that before hitting the dog park!  If you do have a dog at home, see if you can bring it to the shelter to see how the two interact.

All dogs will require some kind of ongoing “grooming” care, but this can really vary by breed as well as your dog’s activity level.  Find out if the dog sheds, how often he would need to be brushed, if he drools, how frequently hair cuts are required, etc. While these are all just little things, you want to know what you’re getting into and how much work {and money!} will be required.

What happens if things don’t work out?

Adopting a dog is a long term commitment that you have to be prepared to make; however, sometimes things happen that are out of your control.  While you can do your best to try and get the best match for your new fur baby, dogs can act differently in different environments.   Adopt and Shop will take back their animals at any time if things are not working out at home.  They would much rather have them there in a safe environment than out on the streets or brought in to another shelter where the dog may be euthanized.

Poor Sammy had actually been returned to the shelter three times prior to me adopting him due to “destructive behaviour” and separation anxiety.  While I was a little hesitant about this at first, I knew that he would not have to be alone for long periods of time on a regular basis and that the other dogs would still be there to keep him company when we weren’t home.  Thankfully, he’s been great and we haven’t had any incidents at all.  I guess the other dogs are good babysitters. 🙂 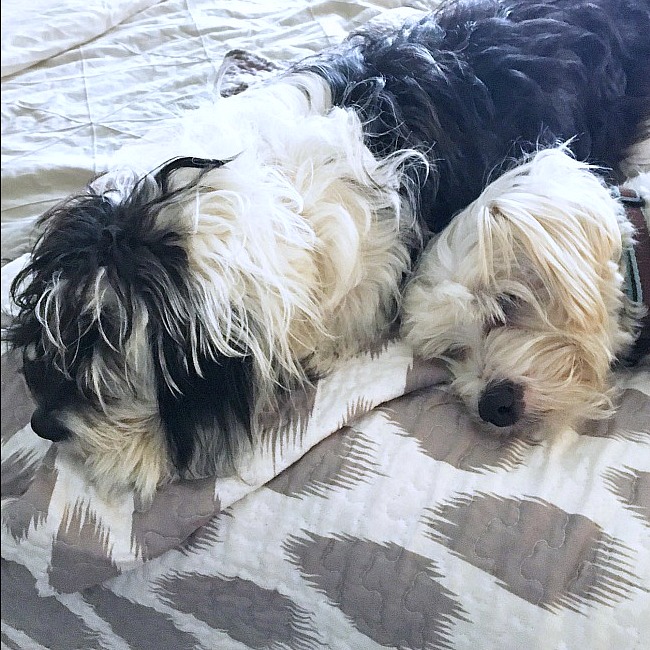 The Swiffer group was also so accommodating and helpful, and let me take some time out from the afternoon activities to get things in place for Sammy.  One of the girls {who also had just recently adopted her own sweet dog} drove me around to get a few supplies before returning to our hotel, Sofitel. Thankfully, it was a pet friendly hotel and the staff even went out of their way to gather Sammy some new toys and special treats when they found out that I had just adopted him. Needless to say, Sammy settled in quite nicely. 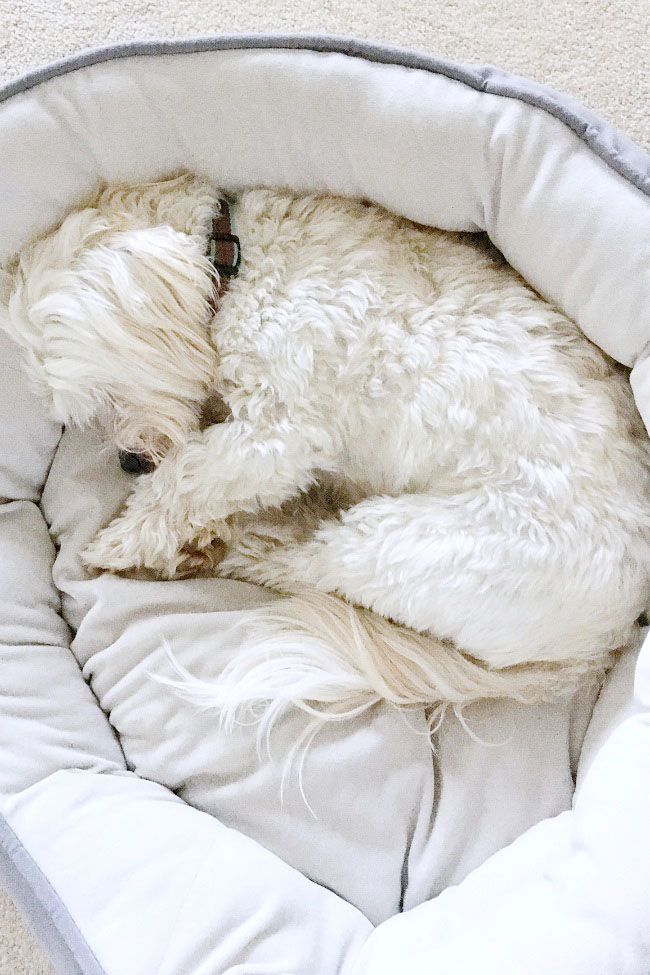 We were up bright and early the next morning for a Warner Brothers studio tour.  I was hoping to catch a glimpse of Ellen but no luck!  Boo. There were some amazing exhibits though {including an awesome Harry Potter tour} and we even got to see some of the sets from Friends, Gilmore Girls, and Growing Pains {remember that one?}!  I’d definitely recommend the tour if you’re ever visiting the LA area. 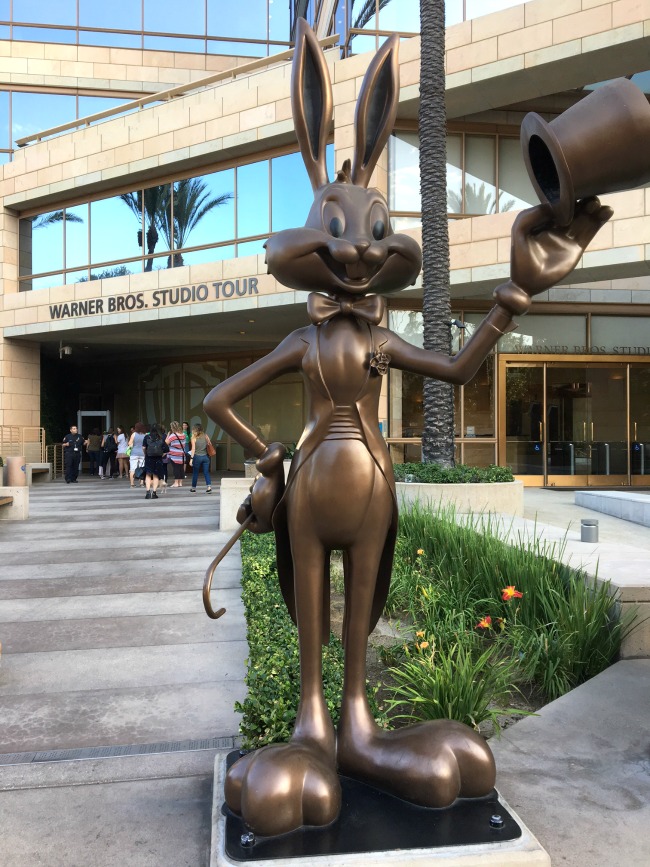 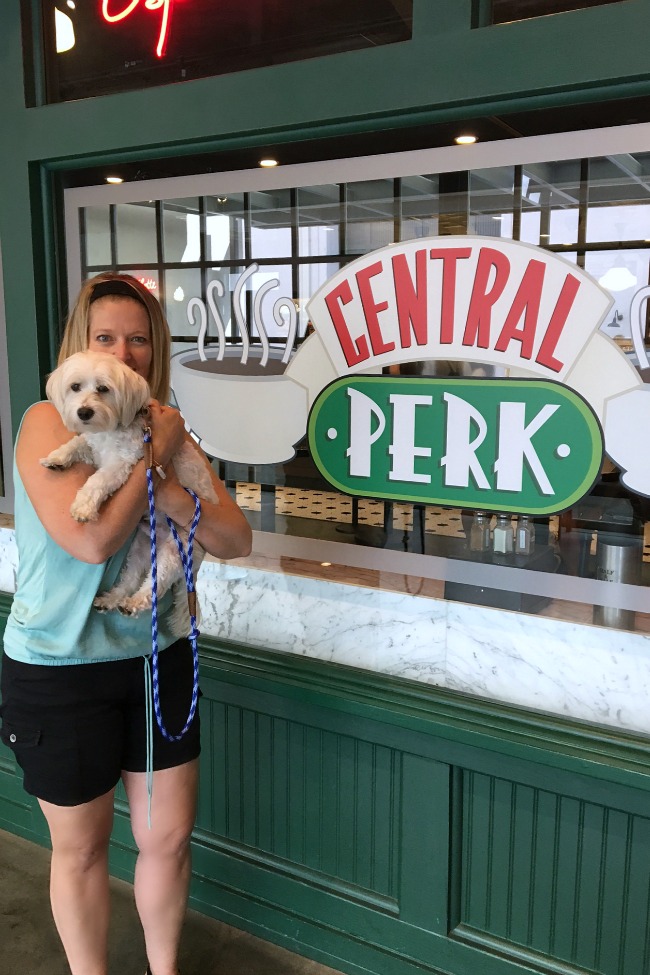 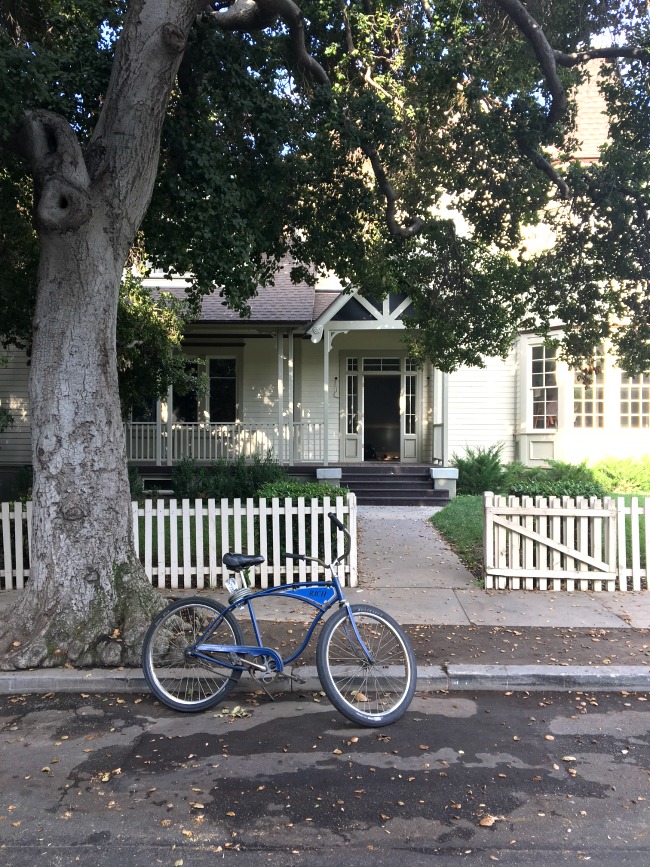 The last stop was at Capitol Records. We actually got to record in the same studio as some of my favorite artists {like John Mayer, Sam Smith, Imagine Dragons, and Michael Buble!}.  If you want to hear our completed jingle, just click below.  It might not be quite the same calibre that they’re used to but it was lots of fun! 😉 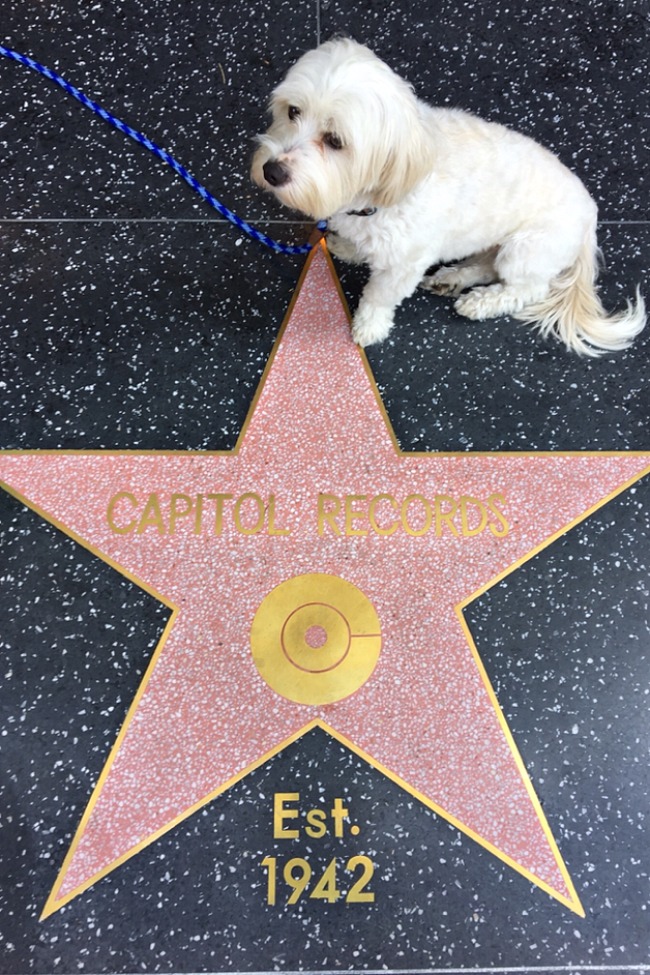 Now for a crazy story…

Sammy wasn’t allowed into the studios so one of the Swiffer team members took him out for a walk while we were recording.  When she got back she was waiting outside of the building and an employee from Capitol Records, Patty, came out to offer Sammy some water.  They chatted for a couple of minutes and discovered that Patty had actually gone to Adopt and Shop the day before to try and adopt Sammy too!  She had seen him on their website and headed over after work – just an hour or so after I had left with him!  What are the odds???  It still blows me away that in a city the size of LA, our paths ended up crossing.

Anyways, it was a crazy couple of days, but we are so happy to have Sammy in our home.  He’s super sweet, is an awesome playmate for Oreo, and the boys are constantly cuddling with him. He’s also my little shadow and follows me around wherever I go. 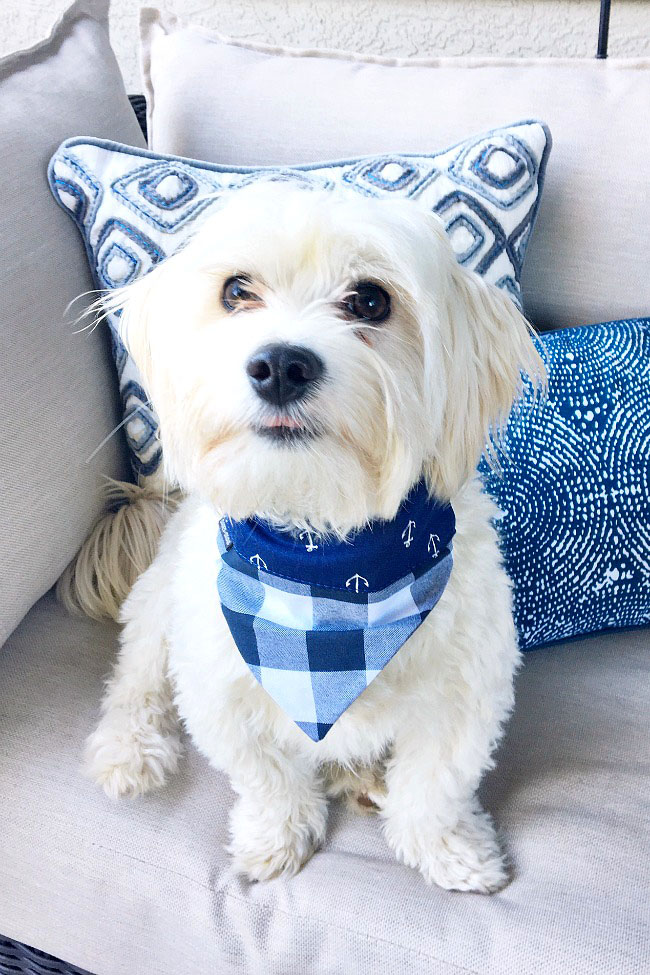 So, now I guess I have to thank Swiffer for giving me a dog as well as helping to keep my house clean!

“What a beautiful life it would be if people had hearts like dogs.”